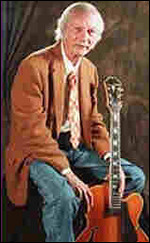 Born in Medora, Indiana, Collins first played the mandolin professionally as a bluegrass musician in the early 1950s. After service in the Army, he moved to Cincinnati, Ohio, and switched to jazz guitar[1][2] after hearing swing guitarists Charlie Christian, Irving Ashby, and Oscar Moore. He played in Cincinnati for twenty years.[1]

Benny Goodman hired him in 1976 at the age of 43.[2] He spent three years with the Goodman orchestra and then three years making albums for Concord Records. As a leader and sideman, he worked with Scott Hamilton, Warren Vache, Rosemary Clooney, Ross Tompkins, Woody Herman, John Bunch, and Marshal Royal.[1]

In the early 1980s, Collins returned to Cincinnati and slowed down his career. He joined the Masters of the Steel String Guitar Tour in 1993 with Jerry Douglas and Doc Watson and recorded his last album in 1998. In 2001, he died of liver failure.[1]

This article uses material from the article Cal Collins from the free encyclopedia Wikipedia and it is licensed under the GNU Free Documentation License.

Hello Little Girl Count Basie Orchestra
Update Required To play the media you will need to either update your browser to a recent version or update your Flash plugin.