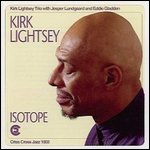 Lightsey had piano instruction from the age of five and studied piano and clarinet through high school. After service in the Army, Lightsey worked in Detroit and California in the 1960s as an accompanist to singers. He also worked with jazz musicians such as Yusef Lateef, Betty Carter, Pharoah Sanders, Bobby Hutcherson, Sonny Stitt, Chet Baker, and Kenny Burrell. From 1979 to 1983 he toured with Dexter Gordon and was a member of The Leaders in the late 1980s. During the 1980s he led several sessions of his own, including duets with pianist Harold Danko. In the 1980s and since he has worked with Jimmy Raney, Clifford Jordan, Woody Shaw, David Murray, Joe Lee Wilson, the late, great, Irish guitarist Louis Stewart, Adam Taubitz, Harold Land and Gregory Porter.

He is also an accomplished flautist and occasionally doubles on flute in live performances. He has been living in Paris since 2000.

With Blue Mitchell and Harold Land

This article uses material from the article Kirk Lightsey from the free encyclopedia Wikipedia and it is licensed under the GNU Free Documentation License.

Everyday I Have The Blues Jimmy McGriff
Update Required To play the media you will need to either update your browser to a recent version or update your Flash plugin.