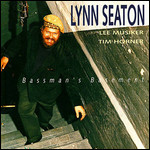 Lynn Seaton (born July 18, 1957 in Tulsa, Oklahoma) is a jazz bassist associated with bebop and swing.

He is rarely the lead, with 1991's Bassman's Basement being an exception. He has appeared on several albums, including Nirvana by Bucky Pizzarelli.

He began with classical guitar, but switched to bass at age 9. He began his professional career after moving to Ohio with the Steve Schmidt Trio and later he did a two-year world tour with Count Basie's orchestra. He currently teaches at the University of North Texas.

This article uses material from the article Lynn Seaton from the free encyclopedia Wikipedia and it is licensed under the GNU Free Documentation License.