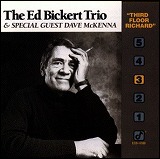 Bickert was born in Hochfeld, Manitoba, the second youngest of his family. Soon after he was born, the family moved to Vernon, British Columbia. Although their occupation was farming and orchard work, his mother was a pianist and his father a fiddler. Bickert learned basic guitar chords from his older brother. On weekends during the 1940s, he joined his parents playing at country dances. After high school, he worked briefly before driving across Canada to Toronto, Ontario with an aspiring writer friend, in 1952. After a few non-paying jobs and formal guitar lessons, he became the guitar player for one of the leading jazz groups in Toronto.

By the sixties, he was a first-call studio musician. Notable for his long association with the late Moe Koffman and Phil Nimmons' recordings, Bickert became a charter member of Rob McConnell's Boss Brass. He also played in local gigs with American musicians who employed Toronto rhythm sections. He played regularly at George's Spaghetti House with fellow members of Moe Koffman's band, with and without Koffman. Bickert married, and eschewing the road, stayed at home and raised a family.

In the 1970s Jim Hall, a friend of Bickert, recommended him to Paul Desmond, who was forming a band. Desmond felt a rapport with Bickert and Don Thompson. They appeared at the now-defunct Bourbon Street club in Toronto, with two different drummers. Recordings from those sessions were released as Paul Desmond Quartet Live in LP format by A&M Records. Additional tracks were released much later on CD by Telarc. Desmond's enthusiasm for Bickert's style persuaded him to record with Bickert in the United States at Rudy Van Gelder's studio. They played with Connie Kay (drums) and Ron Carter (bass) and recorded the album Pure Desmond.

Bickert's use of the solid-body Fender Telecaster set him apart from his peers. He used the same Telecaster for many years, playing it in stock form. At some point, he replaced the standard neck single coil with a humbucking pickup (which can be seen in the photo above).

Bickert made a few albums with Rosemary Clooney and other well-known artists through the 1980s and 1990s, as well as leading his own sessions. Although he did not formally teach students in one-on-one lessons, he was a well-known clinician and had many aspiring players attend his workshops. In the mid 1990s, a fall caused serious injuries to his arms. He recovered, and continued to play and tour until his retirement in the early 2000s, after the death of his wife, Madeline.

This article uses material from the article Ed Bickert from the free encyclopedia Wikipedia and it is licensed under the GNU Free Documentation License.