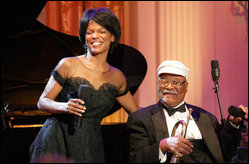 One critic described her as "a spell-binding professional, who rivets attention with her glorious, cultivated voice and canny stagecraft".[3] She has performed at Carnegie Hall, Hollywood Bowl, Ellington Jazz Festival, Monterey Jazz Festival, Apollo Theater, Montreux Jazz Festival, the John F. Kennedy Center for the Performing Arts, and more.

Freelon was born Chinyere Nnenna Pierce to Charles and Frances Pierce in Cambridge, Massachusetts, where she was raised.[4] As a young woman, she sang extensively in her community and the Union Baptist Church and at St. Paul AME. She has a brother Melvin and a sister named Debbie. Nnenna graduated from Simmons College in Boston with a degree in health care administration. For a while she worked for the Durham County Hospital Corporation, Durham, North Carolina. From the Kennedy Center interview with Nnenna:

"I started singing in the church, like so many others. . . ." She suggests that her influences included several "not famous people", as well as such familiar names as Nina Simone and Billy Eckstine, artists whose records her parents played at home. "It's important to expose your children to a wide musical environment," she says, grateful that her parents did just that. Nnenna followed her grandmother's sage advice regarding those singing aspirations. "I did something that my grandmother told me: 'bloom where you're planted', 'don't get on a bus and go to New York or L.A., sing where you are'."[5]

In 1979, she married architect Philip Freelon. She and her husband raised three children, Deen, Maya and Pierce, before she decided to perform professionally as a jazz singer.[6] Their son Pierce Freelon is a Hip-Hop artist, a visiting professor of Political Science at North Carolina Central University and the founder of a website called Blackademics, where he has interviewed many notable figures such as Angela Davis, Maya Angelou, Nikki Giovanni, and Jesse Jackson.[7] Deen Freelon is an assistant professor in the School of Communication at American University studying social media and politics.[8] Daughter Professor Maya Freelon, is an award-winning visual artist.

In 1990, Nnenna Freelon went to the Southern Arts Federation's jazz meeting and met Ellis Marsalis. "That was a big turning point. At that time, I had been singing for seven years. Ellis is an educator and he wanted to nurture and help. What I didn't know at the time was that George Butler of Columbia Records was looking for a female singer. Ellis asked me for a package of materials. I had my little local press kit and my little tape with original music. Two years later, I was signed to Columbia Records." She was in her late 30s when she made her debut CD, Nnenna Freelon, for Columbia in 1992. The label dropped her in 1994, and Concord Records signed her in 1996.[9]

In Maiden Voyage (1998), she leaves behind standard and comfortable conventions and releases an inner spirit that allows her to creatively soar to a higher dimension. Watch out! When a woman reaches this point there's no telling what will come next.[10] Freelon's seventh album, Tales of Wonder (2002), covers hit songs written and/or recorded by Stevie Wonder. She considers him one of the greatest artists of our time and describes how his music easily became her music, as it touched her life throughout the years. "A lot of Stevie Wonder's music is on the level of many other unique artists like Duke Ellington, like Thelonious Monk. When you hear Stevie, you know that's who it is. I put him in a genius class, he's fabulous."[11] On her Grammy-nominated release, Blueprint of a Lady: Sketches of Billie Holiday (2005), which comes highly recommended, Freelon pays tribute to the quintessential jazz vocalist Billie Holiday in the best possible way—without imitation and putting her own interpretations on material written by or associated with Lady Day. Her band, adjusted to fit the mood of each song, skillfully complements her at every turn. With Freelon is a group of veteran jazz artists who give her album a welcome presence. Tenor saxophonist Dave Ellis, trumpeter Christian Scott, and flutist Mary Fettig add stellar musical partnerships to the program. Freelon's long-term quartet of Brandon McCune, Wayne Bachelor, Kinah Boto, and Beverly Botsford provide cohesive accompaniment that serves as an intuitive accompaniment for her vocal offerings.

Nnenna Freelon is deeply involved in arts education as the national spokesperson for the National Association of Partners in Education, an organization with over 400,000 school/community partnership programs across the United States, dedicated to the improvement of the quality of American education by supporting arts education programs.[12] Freelon has also maintained ties to her hospital-work roots as her jazz career has flourished. Her Babysong workshops, which she launched at Duke University Medical Center in 1990, teach young mothers and healthcare providers the importance of the human voice for healing and nurturing. She particularly stresses the importance of parents singing to small children to enhance brain development.[13][14]

Nnenna Freelon was awarded the Eubie Blake Award from the Eubie Blake National Jazz Institute, and the Billie Holiday Award from the Academie du Jazz. Freelon performed a film soundtrack, remaking Frank Sinatra's classic "Fly Me to the Moon" for The Visit movie, starring Billy Dee Williams. She also had a cameo as a nightclub singer in the 2000 Mel Gibson romantic comedy What Women Want, performing her trademark song "If I Had You". In addition, she has been nominated twice for the "Lady of Soul" Soul Train Award.[15] On February 21, 2001, Nnenna Freelon earned a standing ovation for her live performance at the 43rd Annual Grammy Awards telecast in Los Angeles, performing Straighten Up and Fly Right.[16]

This article uses material from the article Nnenna Freelon from the free encyclopedia Wikipedia and it is licensed under the GNU Free Documentation License.