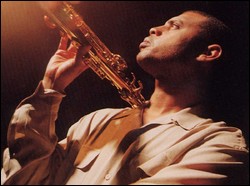 Steve Wilson (born 1961 in Hampton, Virginia) is an American jazz multi-instrumentalist, who is best known in the musical community as a flautist and an alto and soprano saxophonist. He also plays the clarinet and the piccolo.[1] Wilson has maintained a busy career working as a session musician, and has contributed to many musicians of note both in the recording studios, but as a sideman on tours. Over the years he has participated in engagements with several musical ensembles, as well as his own solo efforts.

Wilson has not confined himself to the studio and stage. He has held teaching positions in several schools and Universities, as well as holding jazz clinics.

As a teenager, Wilson played in various rhythm and blues and funk bands. After a year accompanying singer Stephanie Mills, he attended Virginia Commonwealth University in Richmond, Virginia, where he majored in music. In 1987 he moved to New York, where he established himself as a sideman. He performed with the American Jazz Orchestra, the Mingus Big Band, and the Smithsonian Jazz Orchestra, among others. In 1988 he toured Europe with Lionel Hampton. Early in his career he was a member of Out of the Blue, a group which featured young Blue Note artists.

Wilson was the subject of a 1996 New York Times profile, entitled "A Sideman's Life". That year he joined the Dave Holland Quintet. From 1998-2001 he was a member of Chick Corea's Origin sextet. He played and recorded on Japanese composer Yoko Kanno's debut album, Song to Fly and part of The Seatbelt's New York Musicians during that period.

In 1997 he formed the Steve Wilson Quartet with pianist Bruce Barth, Double bassist Ed Howard and drummer Adam Cruz. The group has performed together for over a decade and produced two CDs. He also heads a larger ensemble, Generations, which performs jazz classic and original compositions, and he has performed in a duo with drummer Lewis Nash.

In May 2007 he performed as a soloist for Queen Elizabeth II and Prince Philip during the Jamestown, Virginia quadricentennial. Wilson is on the faculty at the Manhattan School of Music, State University of New York at Purchase, and Columbia University. He has been an artist-in-residence at the University of North Carolina, Hamilton College, Old Dominion University, and with the CITYFOLK arts program in Dayton, Ohio. ote 7]], a septet formed that year in honor of the 70th anniversary of Blue Note Records. The group recorded an album in 2008, entitled Mosaic, which was released in 2009 on Blue Note Records/EMI, and toured the United States in promotion of the album from January until April 2009.[2] The group plays the music of Blue Note Records from various artists, with arrangements by members of the band and Renee Rosnes.

This article uses material from the article Steve Wilson (jazz musician) from the free encyclopedia Wikipedia and it is licensed under the GNU Free Documentation License.

Sweet Lorraine Ernie Andrews
Update Required To play the media you will need to either update your browser to a recent version or update your Flash plugin.