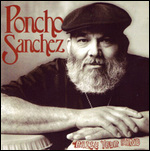 Poncho Sánchez (born October 30, 1951) is a Mexican American conguero (conga player), Latin jazz band leader, and salsa singer. In 2000, he and his ensemble won the Grammy Award for Best Latin Jazz Album for their work on the Concord Picante album Latin Soul. Sanchez has performed with artists including Cal Tjader, Mongo Santamaría, Hugh Masekela, Clare Fischer, and Tower of Power.[1]

The youngest of eleven children, Poncho Sanchez was born in Laredo, Texas and reared in Norwalk, California. Growing up, he was exposed to and influenced by two very different styles of music: Afro-Cuban music (mambo, son, cha-cha, rumba, guaracha, and Changui) by greats such as Tito Puente, and bebop jazz, including the works of Dizzy Gillespie and Charlie Parker.

Originally a guitarist, he discovered his talent for singing during an audition for the R&B band The Halos that rehearsed across the street from his residence. Sanchez became the lead vocalist of The Halos, and would go on to teach himself the flute, the drums, and timbales before finally deciding in high school to pursue conga drumming above all.

Sanchez’s long career includes a vast musical legacy with dozens of LP and CD album releases and many thousands of public appearances. He is a favorite and often-featured artist at regional and national Latin Jazz festivals and concerts.

In 1975, Sanchez's idol, vibraphonist Cal Tjader, invited him to perform a set with his band. Seeing the young man's talent, Tjader hired Sanchez for a week before officially making him a full member of the ensemble. Sanchez played a crucial role as conguero for several years until Tjader's death in 1982.

Before he died, Tjader suggested that Concord Records founder Carl Jefferson sign Sanchez and his soon-to-be-formed group under the Concord Picante label. Tjader's wishes were honored, and the first two records were composed and arranged by long-time Tjader collaborator Clare Fischer.

Sanchez went on to produce 19 albums for the label, eventually garnering a Grammy for his work. Currently, Sanchez is respected as one of the top American percussionists of our time. He performs frequently in venues varying in size from concert halls to local jazz festivals. His 2005 CD, Do It!, features the iconic funk band Tower of Power on two tracks as well as South African trumpeter Hugh Masekela.

Sanchez is a frequent collaborator with bandleader José Rizo. He played conga on the Grammy-nominated album Mongorama produced by Rizo.

This article uses material from the article Poncho Sanchez from the free encyclopedia Wikipedia and it is licensed under the GNU Free Documentation License.