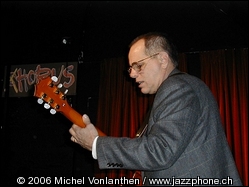 Born in Philadelphia, Beck moved to Manhattan in his teens, playing six nights a week in a trio setting, which gave him an opportunity to meet various people working in the thriving New York music scene. By the time he was 18, Stan Getz had used him to record some jingles, and in 1967 he recorded with Miles Davis.[2] By 1968, at age 22, he was a member of the Gil Evans Orchestra. Beck described his early success in an interview near the end of his life:

My career happened because I happened to be in the right place at the right time in a very unique time of jazz music. ...when I would finish a gig around two in the morning I would go around the corner to the Playboy Club and sit in with Monty Alexander and let Les Spann take a breather and I would finish the gig for him. Then we would go and listen to Kenny Burrell play around the corner or we would go up to Mintons and listen to Wes Montgomery and sit in with him ...[3]

Beck played in a variety of jazz styles, including jazz fusion, post bop, mainstream jazz, and soul jazz, but also respected rock stylists and cross-over players (he was good friends with Larry Coryell)[3] and briefly flirted with rock music styles himself in the late 1960s and early 1970s.

In 1970 he released Rock Encounter on Polydor Records.[1] In 1975 he released an eponymous album (upon which he simply referred to himself as "Beck") while recording the Esther Phillips album, What a Diff'rence a Day Makes, both on Kudu Records.[1][4] Beck was subsequently reissued as Beck & Sanborn to cash in on the success of alto saxophonist David Sanborn. In 1978, he went for more of a rock sound by forming a band named "Leader". They performed in the Northeast and recorded demos at Sound Ideas Studios in New York City, but soon disbanded when the band's gear was stolen after a gig at Joyous Lake in Woodstock, New York. In the 1980s Beck recorded several CDs for the DMP Digital Music Products label, including co-billed work with flautist Ali Ryerson. In 2000, he released a collaboration with Jimmy Bruno, Polarity,[1] and Coincidence in 2008 with John Abercrombie.[1]

For the next two decades Beck toured and recorded with duos and small groups, releasing two more solo albums (1988, 1991) before retiring in 2000. Following his retirement and until his death, he continued to tour occasionally, and released a number of collaborative albums (e.g., Coincidence, with John Abercrombie, 2007).

Beck died in Woodbury, Connecticut, of complications from lung cancer.[1] His album Get Me Joe Beck was posthumously released in 2014.[5] Before his death, he was on the faculty at Naugatuck Valley Community Technical College in Waterbury, Ct. where he taught Jazz History as well as led the Jazz Club and taught private lessons in 2003 and 2004. In 2005 and 2006 he taught the guitar club as a volunteer at nonnewaug high school in Woodbury Connecticut.

In 1992 Beck began touring as a duo with flutist Ali Ryerson. To fill out the sound he wanted to present—bass lines, harmony, and melody—in a duo setting, he developed what he called the "alto guitar". This began as a standard, full-body, electric jazz guitar with a unique stringing pattern and reentrant tuning. As described by Beck:

It's pretty straight-ahead, really. Take your whole guitar and tune it down a fifth to the key of A, and then tune the middle two strings up an octave. What I've done is take the normal tuning of the guitar and changed it so that I have bass strings for my thumb; sort of a banjo register for my first two fingers, and then a low melody register for my other two fingers. [...] So you don't have to change any of your fingerings; it's the same intervals as in normal tuning, just in the key of A, so it's A-D-G-C-E-A."[6][7]

While devising the tuning Beck realized that some restringing was going to be needed to obtain optimal resonance from the strings, so he commissioned a custom-built instrument from luthier Rick McCurdy, of Cort Guitars:

I had someone build me a guitar, Rick McCurdy as it happens, and he made me a beautiful guitar and so I started using it on the concert stage.[3]

I'm actually playing through three channels. The reason the guitar is a patented invention is that this pickup is split so that the bass strings have their own output. And the top four melody strings are coming out of another output, which in turn is split stereo by a chorus. The bass strings are .080 and .060. Then a .022 wound and a .016 plain. Then a .026 wound and a .018 plain. [...] I wanted to be more pianistic, to play clusters sort of like those Bill Evans employs, that you couldn't possibly play otherwise."[8]

With Duke Ellington and Teresa Brewer

This article uses material from the article Joe Beck from the free encyclopedia Wikipedia and it is licensed under the GNU Free Documentation License.