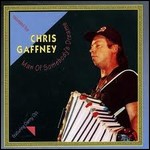 Chris Gaffney (October 3, 1950 – April 17, 2008)[1] was an American singer and songwriter from the Southwest. His career, both as a solo musician and as a member of several bands, was as eclectic as his musical tastes. Although he never achieved widespread fame, Gaffney, who died at the age of 57 from liver cancer,[2] left his mark on country, rock, soul, and other forms of American music. In its obituary, the LA Times described Gaffney as "a peer of [Dave] Alvin, Los Lobos, X and the Red Hot Chili Peppers in chronicling the life of Southern California."[3]

A self-described "army brat," Christopher F. Gaffney was born in Vienna, Austria,[1] he then moved to Livorno, Italy and New York as a young child. But Gaffney grew up primarily in southern California and Arizona.[4] In addition to music, Gaffney loved sports, especially boxing, and earned an LA Golden Gloves championship in 1967 and even trained with boxing hall-of-famer Jackie McCoy.[5]

As a child, he learned to play the accordion and listened to norteno, country, and rock & roll.[6] As a teenager, Gaffney played in various house band and eventually released his first solo album, Road to Indio, in 1986. Produced by friend Wyman Reese, his debut album demonstrated his "genre-bending"[7] tastes by showcasing forays into honky tonk, soul, and Bakersfield country.[6]

His next album was as Chris Gaffney & the Cold Hard Facts. Released in 1990, this album revealed Latino influences and dealt with issues of poverty and working-class life. Two years later, Gaffney released Mi Vida Loca which has been described as a "cross between Merle Haggard and The Blasters."[8] His next solo album, Loser's Paradise, (2003) was produced by Gaffney's friend Dave Alvin[9] and featured contributions from Lucinda Williams and Jim Lauderdale.

In 2002, Gaffney formed the band Hacienda Brothers with guitarist and songwriter Dave Gonzalez, founding member of The Paladins. They recorded their third studio album shortly before Gaffney's death in early 2008. He died from liver cancer in Newport, California.[1]

In addition to his solo and band work, Gaffney has also toured as a member of Dave Alvin & the Guilty Men[9] and contributed to albums by Lucinda Williams, The Iguanas, Tom Russell, Christy McWilson, The Lonesome Strangers, and Billy Bacon.

In 2009, a tribute album to Gaffney was released, A Man of Somebody's Dreams: A Tribute to the Songs of Chris Gaffney, which included songs played by fellow Hacienda Brothers as well as others such as Dave Alvin and Los Lobos.[10]

In 2011, Dave Alvin included a song about Gaffney, "Run Conejo Run", in his album Eleven Eleven.

With the Hacienda Brothers

This article uses material from the article Chris Gaffney from the free encyclopedia Wikipedia and it is licensed under the GNU Free Documentation License.

A New York Tourist In Paris Claude Tissendier Saxomania & Clark Terry
Update Required To play the media you will need to either update your browser to a recent version or update your Flash plugin.