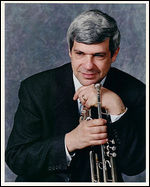 Randy Sandke (born 1949 in Chicago) is a jazz trumpeter and guitarist.

In an interview with Larry Kart he said: "I got into jazz kind of chronologically, beginning with Bix and Louis, then Dizzy, Clifford Brown, Miles, and Freddie Hubbard. I also studied at Roosevelt University with Renold Schilke, a legendary teacher and maker of trumpets who was with the Chicago Symphony for years".[1] His high-school band included future luminaries Ray Anderson and George Lewis; when he went to Indiana University, he met Michael Brecker and formed a jazz-rock band. He was offered a job with Janis Joplin, but a hernia of the throat had by then made it impossible for him to play.

He spent the 1970s playing guitar in New York, until he was encouraged by a trumpeter friend to take up his original instrument again. He became associated with the traditional jazz scene, working with Vince Giordano and Bob Wilber; it was Wilber who got him a job with Benny Goodman, which lasted from 1984 until Goodman's death in 1986.

Sandke has remained strongly associated with swing music, and he is an authority on the music of Louis Armstrong and Bix Beiderbecke. He is a member of the Bix Beiderbecke Memorial society.[1]. In the Kart interview he states:

...if you grow up playing nothing but modern jazz and shift to a more traditional style, you have to dispense with a lot of your favorite harmonic and rhythmic tricks. Instead the interest has to come from somewhere else – from melody, phrasing, the sheer sound of your instrument. But I believe that those are virtues that can be applied to any style – traditional or modern – and that when you do it, you end up with better music.

His own interests and musical activities range much more widely, however. He remarks in the liner notes to The Subway Ballet: "Okay – I worked with Benny Goodman, but so did Fats Navarro and Herbie Hancock and nobody refers to them as 'swing musicians.' ... Being thus labeled is somewhat akin to being called a child molester in that the tag never seems to go away, and both can be equally deleterious to one's career." He has recorded over twenty albums as a leader, ranging from revisitings of music from the 1920s and 1930s to explorations of contemporary idioms in the company of players like Michael Brecker, Kenny Barron, Marty Ehrlich, Bill Charlap and Uri Caine. He has increasingly become interested in exploring dissonant, nonstandard harmonies that lie outside of conventional triadic harmony, creating a musical theory of what he calls "metatonality", a harmonic system outlined in his book Harmony for a New Millennium.[2] His recent projects have included Trumpet After Dark (a jazz-with-strings album that uses Renaissance viols instead of modern violins) and a pair of albums, Inside Out and Outside In, that feature a lineup uniting "mainstreamers" such as Ken Peplowski with "avant-gardists" such as Ray Anderson and Uri Caine.

Sandke's film soundtrack work includes contributions to Coppola's The Cotton Club and several Woody Allen movies, including Bullets Over Broadway. He also played one of the "Rainbow Room All-Stars" in The Curse of the Jade Scorpion.

This article uses material from the article Randy Sandke from the free encyclopedia Wikipedia and it is licensed under the GNU Free Documentation License.

Besame mucho Alfredo Rodriguez
Update Required To play the media you will need to either update your browser to a recent version or update your Flash plugin.