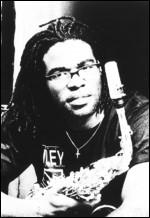 Antonio Hart (born September 30, 1968 in Baltimore, Maryland) is a jazz alto saxophonist. He attended the Baltimore School for the Arts, studied with Andy McGhee at Berklee College of Music, and has a master's degree from Queens College, City University of New York. His initial training was classical, but he switched to jazz in college.[1] He gained recognition for his work with Roy Hargrove.[2]

Hart is currently serving as a full-time professor of jazz studies in Aaron Copland School of Music at Queens College City University of New York.

Hart is a member of Alpha Phi Alpha fraternity [3]

This article uses material from the article Antonio Hart from the free encyclopedia Wikipedia and it is licensed under the GNU Free Documentation License.

Concerto For Cootie Arturo Sandoval
Update Required To play the media you will need to either update your browser to a recent version or update your Flash plugin.