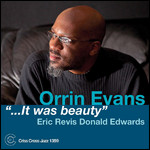 Orrin Evans (born 1976) is an American jazz pianist. Evans was born in Trenton, New Jersey and raised in Philadelphia. He attended Rutgers University, and then studied with Kenny Barron. He worked as a sideman for Bobby Watson, Ralph Peterson, Duane Eubanks, and Lenora Zenzalai-Helm, and released his debut as a leader in 1994. He signed with Criss Cross Jazz in 1997, recording prolifically with the label. He was awarded a 2010 Pew Fellowships in the Arts.[1]

This article uses material from the article Orrin Evans from the free encyclopedia Wikipedia and it is licensed under the GNU Free Documentation License.

Two Of A Kind John Proulx & Michael Feinstein
Update Required To play the media you will need to either update your browser to a recent version or update your Flash plugin.