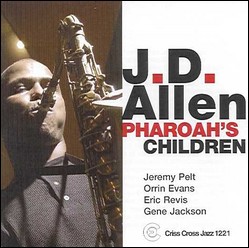 Allen's debut album, In Search Of J.D. Allen, was awarded the Best New Artist award in Italy in 1999. His next release, Pharoah's Children, was named one of Jazziz Magazine's Critics Pics Top 10 Albums of the Year. The Victory! album, released in 2011, received a four star rating in DownBeat[3] and was ranked as the third best jazz album of 2011 by NPR.[4] Won DownBeat's 2011 Rising Star Award.

This article uses material from the article J. D. Allen III from the free encyclopedia Wikipedia and it is licensed under the GNU Free Documentation License.

Three Little Words Joe Newman
Update Required To play the media you will need to either update your browser to a recent version or update your Flash plugin.