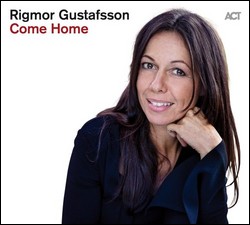 Gustafsson comes from a musical family. Her sister Christina is also a singer in the field of jazz. At the age of eight Rigmor learned how to play the guitar at the public school in Grums, Sweden.[1] She later studied at Sundstagymnasiter in Karlstad where she studied classic guitar-work but moved to singing. She later began to study at The New School for Jazz and Contemporary Music in New York City, USA and at Mannes College of Music.[2] While living in New York she met other musicians and created the Rigmor Gustafsson Quintet. She graduated in 1995, and the quinted continued to tour between 1996 and 1997 in Sweden, Germany and Switzerland.[3]

In 1996 Rigmor Gustafsson's debut album In the Light of Day was released but already in 1994 one could listen to Gustafssons kids-record Sånger från TV-serien Planeten Pi where she sings songs along with Anders Lundin and Lars In de Betou.[4]

In 2003 the German record label ACT signed her and released I Will Wait for You along with the trombonist Nils Landgren.[5] The same year Rigmor performed at the Nobel Banquet.[6] In 2004 the album Close to You was released in which she makes her own version of Dionne Warwick's songs made by Burt Bacharach, the album sold gold.[7] On the album On My Way to You, from 2006, she sings songs by French composer Michel Legrand[8].

On 19 June 2007, Gustafsson participated in the radio show Sommar, which was broadcast on Sveriges Radio P3. The same year the music album Alone With You was released in which she had written all the songs.[9]

This article uses material from the article Rigmor Gustafsson from the free encyclopedia Wikipedia and it is licensed under the GNU Free Documentation License.

Fly Me To The Moon Beat Baumli & Dani Solimine
Update Required To play the media you will need to either update your browser to a recent version or update your Flash plugin.