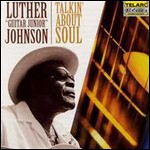 Johnson moved to the East Coast and began fronting his own band, the Magic Rockers.[1] His "Walkin' The Dog," was recorded live at the Montreux Festival's Blues Night. Johnson won a Grammy Award in 1985 for Best Traditional Blues Album for his part in Blues Explosion.

Johnson appeared on three albums by The Nighthawks. He now lives in New Hampshire.

This article uses material from the article Luther Johnson (Guitar Junior) from the free encyclopedia Wikipedia and it is licensed under the GNU Free Documentation License.

Why Should I Care Barbara Balzan
Update Required To play the media you will need to either update your browser to a recent version or update your Flash plugin.