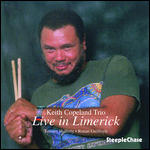 His father, Ray Copeland, was a jazz trumpeter, and he learned by watching him, but he decided to play drums after studying Art Blakey's records with The Jazz Messengers.

In his teens played with Barry Harris.[2] He later worked with the Heath Brothers, but Percy Heath disliked his style, leading to arguments and to Copeland quitting.[3]

Copeland taught at The New School University in New York City, Rutgers, and Berklee College of Music before moving to Germany in 1992 and teaching in the Hochschule system. His students include Terri Lyne Carrington[5][6] and Adam Cruz.[7]

This article uses material from the article Keith Copeland from the free encyclopedia Wikipedia and it is licensed under the GNU Free Documentation License.

Slammin' Alvin Queen Quintet
Update Required To play the media you will need to either update your browser to a recent version or update your Flash plugin.