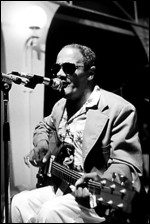 His vocal style was reminiscent of that of Ray Charles; in the 1950s, when he was in his late teens, he sometimes billed himself as "Little Ray Charles". He played a wide range of styles of music within the same concert, album, or even song: blues, rock and roll, jazz, country, and Latin.[5] In his early years, he also played acoustic blues.[5]

His ability to play a wide range of songs and make them his own earned him the nickname "The Human Jukebox." Eaglin claimed in interviews that his musical repertoire included some 2,500 songs.[1]

At live shows, he usually did not prepare set lists and was unpredictable, even to his bandmates. He played songs that came to him on stage, and he also took requests from the audience.

Eaglin lost his sight not long after his first birthday, having been stricken with glaucoma, and spent several years in the hospital with other ailments. Around the age of five he received a guitar from his father and taught himself to play by listening to and playing along with the radio. A mischievous youngster, he was given the nickname "Snooks" after a radio character named Baby Snooks.

In 1947, at the age of 11, Eaglin entered a talent contest organized by the radio station WNOE and won it with his performance of "Twelfth Street Rag."[1][6][7] Three years later, he dropped out of a school for the blind to become a professional musician. In 1952, he joined the Flamingoes, a local seven-piece band started by Allen Toussaint. The Flamingoes did not have a bass player, and according to Eaglin, he played both the guitar and the bass parts simultaneously on his guitar. He stayed with the Flamingoes for several years, until the group disbanded in the mid-1950s.

As a solo artist, his recording and touring were inconsistent, and for a man with a career of about 50 years, his discography is rather slim. His first recording was in 1953, playing guitar at a recording session for James "Sugar Boy" Crawford.

The first recordings under his own name were made by Harry Oster, a folklorist from Louisiana State University, who found Eaglin playing in the streets of New Orleans and recorded him in seven sessions between 1958 and 1960. For these recordings, Eaglin played in a folk blues style, accompanying himself on an acoustic guitar, without a band. These recordings were later released by several labels, including Folkways, Folk-Lyric, and Prestige/Bluesville.[8]

From 1960 to 1963, Eaglin recorded for Imperial.[5] He played electric guitar in sessions for Imperial, with backup from a band including James Booker on piano and Smokey Johnson on drums. He recorded 26 tracks for Imperial (available on The Complete Imperial Recordings), many of which were songs written by Dave Bartholomew. Unlike the Harry Oster recordings, these works on Imperial are New Orleans R&B in the style for which he is widely known today.[5] After Imperial, in 1964, he recorded alone at his home with a guitar for the Swedish Broadcasting Corporation; these recordings were released on the album I Blueskvarter 1964: Vol. 3.[9] For the remainder of the 1960s, he apparently made no recordings.

His next recorded work was for the Swedish label Sonet in 1971. Another album, Down Yonder, with Ellis Marsalis on piano, was released in 1978. Apart from his own work, Eaglin took part in recording sessions with Professor Longhair in 1971 and 1972 (released on the album Mardi Gras in Baton Rouge). He also played guitar on the first album by the Wild Magnolias, recorded in 1973.

Eaglin joined Nauman and Hammond Scott of Black Top Records in the 1980s and obtained a recording contract with the label.[5] Eaglin's years with Black Top were the most consistent years of his recording career. Between 1987 and 1999, he recorded four studio albums and a live album and appeared as a guest on a number of recordings by other Black Top artists, including Henry Butler, Earl King, and Tommy Ridgley.

After Black Top Records closed, Eaglin released the album The Way It Is for Money Pit Records, produced by the Scott brothers of Black Top. In 1997, Eaglin's version of "St. James Infirmary" was featured in a UK television advertisement for Budweiser lager.[10]

Eaglin died of a heart attack at Ochsner Medical Center in New Orleans on February 18, 2009.[4][11][12] He had been diagnosed with prostate cancer in 2008 and had been hospitalized for treatment.[11][13] He was scheduled to make a comeback appearance at the New Orleans Jazz & Heritage Festival in the spring of 2009.[4][11] In honor of his contributions to New Orleans music, he was depicted in an artist's rendering on the cover of the "Jazz Fest Bible" edition of Offbeat magazine, for the New Orleans Jazz & Heritage Festival in 2009.

For many years, Eaglin lived in St. Rose, a suburb of New Orleans, with his wife, Dorothea. Though he did not play many live shows, he regularly performed at Rock 'n' Bowl in New Orleans and at the New Orleans Jazz & Heritage Festival.[5]

This article uses material from the article Snooks Eaglin from the free encyclopedia Wikipedia and it is licensed under the GNU Free Documentation License.