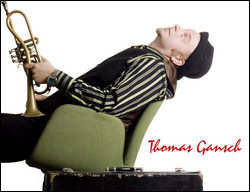 In 1992 the brass septet Mnozil Brass was founded in which he has since played first trumpet. In 1999 he was invited to the Vienna Art Orchestra, a renowned European Big Band.
Later he founded his own "little big band", Gansch & Roses.
Thomas Gansch performs on an unusual looking, self designed trumpet, commonly referred to as the "Gansch Horn" that resembles a standard jazz B♭ trumpet but with a rotary valve system. He uses this with a Bach 3B megatone trumpet mouthpiece.[2] made by the Austrian brass instruments manufacturer Schagerl.

He grew up in a musical family:

Thomas began his studies at Vienna music school at the age of 15.

This article uses material from the article Thomas Gansch from the free encyclopedia Wikipedia and it is licensed under the GNU Free Documentation License.

Here's That Rainy Day Oliver Tabeling Trio
Update Required To play the media you will need to either update your browser to a recent version or update your Flash plugin.