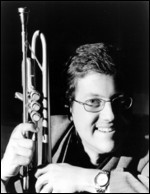 James Robert Rotondi (b. 28 August 1962) is an American jazz trumpeter, educator, and conductor.[1]

The youngest of five siblings, Rotondi was born in Butte, Montana. He lives in Graz, Austria, where he is a professor at University for Music and Dramatic Arts. He performs in Austria and around the world. Before moving to Austria, he played in New York City for twenty years. He has released over ten albums as a leader for Sharp Nine, Criss Cross, Posi-Tone, and Smoke Sessions Records. He has played on over eighty albums as a sideman. He has performed and recorded with a wide variety of artists including Ray Charles, Lionel Hampton, the Toshiko Akiyoshi Jazz Orchestra, Lou Donaldson, Curtis Fuller and George Coleman.

Rotondi leads two groups of his own: one quintet, which features vibraphonist Joe Locke, and one electric band with David Hazeltine called Full House, which uses electronic sound on his trumpet and a variety of other electronic instruments. He is also a member of the group One for All.

In 1984, while attending North Texas State University (now the University of North Texas), he was awarded first place in the International Trumpet Guild's jazz trumpet competition.

This article uses material from the article Jim Rotondi from the free encyclopedia Wikipedia and it is licensed under the GNU Free Documentation License.

But Not For Me Curtis Stigers
Update Required To play the media you will need to either update your browser to a recent version or update your Flash plugin.