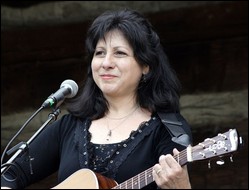 Leticia ("Tish") Hinojosa (born December 6, 1955, San Antonio, Texas) is a folksinger recording in both Spanish and English. Hinojosa was the youngest of 13 children. Hinojosa's parents were Mexican immigrants. Known for singing both traditional Mexican folksongs and her own original songs, both in Spanish and English, Hinojosa accompanies herself on guitar, which she plays right-handed although she is naturally lefthanded. Hinojosa has charted twice on the Billboard country charts and has recorded several albums, primarily for Rounder Records.

Her 1992 album Culture Swing won the NAIRD Indie Folk Album of the Year.

This article uses material from the article Tish Hinojosa from the free encyclopedia Wikipedia and it is licensed under the GNU Free Documentation License.

Guarda Val Dani Felber Orchestra
Update Required To play the media you will need to either update your browser to a recent version or update your Flash plugin.