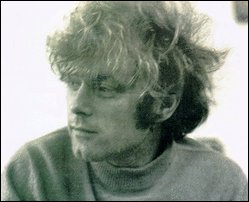 Krzysztof Komeda (born Krzysztof Trzciński; 27 April 1931 – 23 April 1969) was a Polish film music composer and jazz pianist. Perhaps best known for his work in film scores, Komeda wrote the scores for Roman Polanski’s films Knife in the Water (1962), Cul-de-sac (1966), The Fearless Vampire Killers (1967), and Rosemary’s Baby (1968). Komeda's album Astigmatic (1965) is widely regarded as one of the most important European jazz albums; British critic Stuart Nicholson describes the album as "marking a shift away from the dominant American approach with the emergence of a specific European aesthetic."[1]

Born Krzysztof Trzciński, he chose Komeda as his stage name only upon graduation from university as a means of distancing himself as musician from his daytime job in a medical clinic.[2][3]

He grew up in Częstochowa and Ostrów Wielkopolski where in 1950 he graduated from the Gymnasium (high school) for Boys'. While at school, he participated in the Music and Poetry Club. After high school he entered the Medical Academy in Poznań to study medicine. He finished his six-year-long studies and obtained a medical doctor diploma in 1956. He chose to specialize as an otolaryngology physician.

He took music lessons from early childhood; to become a renowned virtuoso was his dream. He became a member of the Poznań conservatorium at the age of eight, but World War II thwarted his plans. Komeda explored the theory of music, and learned to play piano, during this period and later, until 1950; however, he was aware of the loss of the past six years.

Komeda was interested in light and dance music. He met Witold Kujawski, a graduate of the same school and already a well-known swinging bass player, at the gymnasium (high school) in Ostrów Wielkopolski. It was Kujawski who acquainted Komeda-Trzciński with jazz, and took him to Kraków. The romantic period of Polish jazz, called the catacombs, had its day in the spotlight. Concert publicity did not exist then. Jam sessions, which such famous musicians as Matuszkiewicz, Borowiec, Walasek and Kujawski himself participated in, took place in Witold’s legendary small apartment in Kraków.

Some years later, it became clear why Komeda was fascinated with be-bop performed by Andrzej Trzaskowski. The fascination with jazz and the friendship with famous musicians strengthened his connections with music, even though he was a doctor by profession. He worked for some time with the first, postwar, pioneer Polish jazz band, a group called Melomani that was from Kraków and Łódź, whose mainstays were Matuszkiewicz, Trzaskowski and Kujawski.

Later on, he played with various pop groups from Poznań. One of them was Jerzy Grzewiński's group, which soon transformed itself into a dixieland band. Komeda appeared with Grzewiński on the I Jazz Festival in Sopot in August 1956, but he achieved success performing with saxophonist Jan Ptaszyn Wróblewski and vibraphonist Jerzy Milian. The reason for that was simple: dixieland did not meet Komeda’s expectations at the time. He was more fascinated with modern jazz. Thanks to this passion, the Komeda Sextet was created. Krzysztof Trzciński used the stage name 'Komeda' for the first time when he worked at a laryngological clinic, and wanted to conceal his interest in jazz from co-workers. Jazz was beginning its struggle for respectability with the communist authorities in the era of 'the thaw' and Polish society also; it was regarded as a cheap suspicious music from night clubs.

The Komeda Sextet became the first Polish jazz group playing modern jazz, and its pioneering performances opened the way for jazz in Poland. He played jazz that related to European traditions and which was the synthesis of the two most popular groups at that time: The Modern Jazz Quartet and the Gerry Mulligan Quartet.

In the thirteen years after the I Sopot Jazz Festival, the artistic personality of Krzysztof Trzciński became more mature, crystallized and lyrically poetic. Krzysztof was, above all, a constantly searching poet and he could find ways of individual expression of jazz inside himself, in Slavic lyricism, and in the traditions of Polish music.

The years 1956–1962 saw Komeda with his group taking part in domestic festivals and preparing ambitious programs. These were also the years of his first foreign successes in Moscow, Grenoble and Paris. An interesting show was created at that time; it was called "Jazz and Poetry" and shown on Jazz Jamboree '60, and later in Warsaw Philharmonic. Komeda's adventure with film music also began. Scores for the films of Roman Polanski such as Knife in the Water (1962), of Andrzej Wajda such as Innocent Sorcerers (1960), and of Janusz Morgenstern Good Bye, Till Tomorrow (also 1960) were created. This period, which in Komeda's artistic biography can be called the period of growing up and improving his own music language, was crowned with "Ballet Etudes" performed on Jazz Jamboree ’62. Although the reaction of domestic critics for the Etudes was rather cold, it opened the doors to Europe for Krzysztof Komeda Trzciński.

Komeda visited Scandinavia for the first time in spring 1960, and he went back there every year thereafter. All of his performances at the 'Gyllene Cirkeln' (Golden Circle) in Stockholm and at the Montmartre Jazz Club in Copenhagen, where the most famous celebrities of American jazz performed, turned out to be a real success. Metronome, the Swedish record company, recorded his music played by an international quintet: Allan Botschinsky (trumpet), Jan "Ptaszyn" Wróblewski (tenor saxophone), Krzysztof Komeda (piano), Roman Dyląg (stage name: Gucio; contrabass) and Rune Carlsson (percussion). The famous Danish director Hennig Carlsen ordered music for his movies Hvad Med Os, and Sult (the movie based on Knut Hamsun's novel Hunger). Komeda also wrote the music for Tom Segerberg's movie Kattorna and several Polański scores. Overall Komeda wrote more than 70 soundtracks. After successes in Scandinavia, came further successes: jazz festivals in Prague, Blend, Koenigsberg; toure of Bulgaria and both West and East Germany. The Komeda Quartet (Tomasz Stańko (trumpet), Roman Dyląg (bass), Rune Carlsson (percussion), and Zbigniew Namysłowski (saxophone)) recorded in May 1967 ‘Meine süße europäische Heimat - Dichtung & Jazz’ for the West Germany record company Electrola. Komeda stayed in Los Angeles in 1968 where he composed film music for Roman Polanski's Rosemary’s Baby (with one of his most recognizable compositions, "Rosemary's Lullaby" sung by Mia Farrow) and Kulik’s The Riot.

In December 1968, in Los Angeles, Komeda had a tragic accident which led to a haematoma of the brain. He was pushed off an escarpment by writer Marek Hłasko during a drinking party. Roman Polański mentioned in his memoirs that as a result of friendly rough-and-tumble with Marek Hłasko, Komeda fell down and suffered head injuries. Medical treatment in the US hospital did not save his life. After being transported home to Poland in a coma and in a terminal state, he died.

As a jazz musician, he exerted a crucial influence on creating an original style, often described as the Polish school of jazz, which subsequently influenced the Polish jazz scene's development after his death. Since 1995, the Komeda Jazz Festival has been held on a regular basis, including an International Composers' Competition. The goal of the competition is to promote young artists.

This article uses material from the article Krzysztof Komeda from the free encyclopedia Wikipedia and it is licensed under the GNU Free Documentation License.