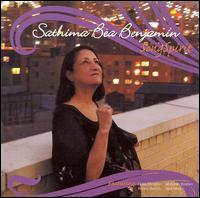 She was born Beatrice Bertha Benjamin[1] in Claremont, Cape Town, South Africa.[2] As an adolescent, she first performed popular music in talent contests at the local cinema (bioscope) during the intermission. By the 1950s she was singing at various nightclubs, community dances and social events, performing with notable Cape Town pianists Tony Schilder and Henry February, among others. She built her repertoire watching British and American movies and transcribing lyrics from songs heard on the radio, where she discovered Nat King Cole, Billie Holiday, Doris Day, Ella Fitzgerald. These musicians would come to influence her singing style, notably in terms of light phrasing and clear diction.

At age 21, she joined Arthur Klugman's traveling show, Coloured Jazz and Variety, on a tour of South Africa. When the production failed, she found herself stranded in Mozambique where she met South African saxophonist Kippie Moeketsi. In 1959, she returned to Cape Town's now thriving jazz scene, where she met pianist Dollar Brand (later known as Abdullah Ibrahim), whom she would marry in 1965. In that same year she recorded what would have been the first jazz LP in South Africa's history. Entitled My Songs for You, with accompaniment by Ibrahim's trio, the recording of mostly standards was never released.[1]

In the aftermath of South Africas Sharpeville Massacre of 1960, Benjamin and Ibrahim left South Africa for Europe. The couple, along with Ibrahim's trio of bassist Johnny Gertze and drummer Makhaya Ntshoko, settled in Zurich, Switzerland and worked throughout Germany and Scandinavia, meeting and occasional working with American jazz players, including Don Byas, Dexter Gordon, Kenny Drew, Ben Webster, Bud Powell, John Coltrane, and Thelonious Monk. The artist who would have the greatest impact on Benjamins life, however, was Duke Ellington.

Benjamin met Duke Ellington while he was in Zurich in 1963. Standing in the wings during most of his bands performance, once the concert ended she insisted that Duke hear her husbands trio at the Club Africana, where Ibrahim's band had a standing engagement. Duke obliged, but insisted that Benjamin sing for him. Following this encounter, Ellington arranged for the couple to fly to Paris and record separate albums for Frank Sinatras Reprise label, for whom Ellington functioned as Artists and Repertoire representative. Ibrahims record, Duke Ellington Presents The Dollar Brand Trio, was released the following year and subsequently helped him build a following in Europe and the United States. Benjamins recording, however, remained unreleased was presumed to be lost until its release in 1996 by Enja Records, under the title A Morning in Paris. The session's engineer, Gerhard Lerner, had surreptitiously made a second copy.

She maintained her musical relationship with Ellington. In 1965, he arranged to have her perform with his band in the U.S. at the Newport Jazz Festival (when she sang the Ellington ballad "Solitude"),[1] and at one point asked her to join his band permanently. Due to her recent marriage to Ibrahim that same year, Benjamin declined the offer.

Throughout the 1960s, Benjamin and Ibrahim moved back and forth between Europe and New York City, as Ibrahim worked to establish his career. Benjamin spent much of the period as a manager and agent for her husband whilst raising their son, Tsakwe. The year 1976 marked a turning point for Benjamin. She and Ibrahim returned to South Africa to live; she gave birth to her daughter, Tsidi (now the underground hip-hop artist Jean Grae); and went recorded African Songbird, an album of original compositions, for South Africa's Gallo Records. Shortly after Tsidi's birth, the family relocated to New York city in 1977, to the famed Hotel Chelsea.[1]

In 1979, Benjamin launched her own record label, ekapa rpm, to produce, publish and distribute her and Ibrahims music. Between 1979 and 2002, she released eight of her own albums on ekapa: Sathima Sings Ellington, Dedications, Memories and Dreams, Windsong, Lovelight, Southern Touch, Cape Town Love, and Musical Echoes.

In 2000, Danish second-hand bookdealer and fan of South African jazz, Lars Rasmussen published a collection of essays and discography of Sathima's music in Sathima Bea Benjamin: Embracing Jazz (2000, Copenhagen). It contains two compact discs of Sathima's music: "Cape Town Love" and an "Embracing Jazz" compilation, and extraordinary photographs of the singer and her life in jazz to that point.

In October 2004, South African president Thabo Mbeki bestowed upon her the Order of Ikhamanga Silver Award in recognition for her "excellent contribution as a jazz artist" in South Africa and internationally, as well as for her contribution "to the struggle against apartheid."[3] In March 2005, the art group Pen and Brush, Inc. presented her with a Certificate of Achievement for her work as a performer, musician, composer, and "activist in the struggle for human rights in South Africa". Benjamin was featured in the March 2006 issue of JazzTimes.[4]

Sathima Bea Benjamins CD SongSpirit, was released on 17 October 2006 in celebration of her 70th birthday. A compilation record, it includes tracks from her earlier albums, plus a previously unreleased duet with Abdullah Ibrahim from 1973.

In 2007, Benjamin began the process of reissuing her now out-of-print back catalogue for download. Cape Town Love, released 19 June, began the process, while A Morning in Pariswas reissued in October 2007 to mark her 71st birthday. It was released for download 16 October, and reissued on CD on 22 January 2008.

Benjamin's compelling life was the subject of a 2010 documentary film entitled Sathima's Windsong, directed by author and professor, Daniel Yon.

In 2011 the book about her life, written in partnership with South African ethnomusicologist Carol Muller over twenty years, Musical Echoes: South African Women Thinking in Jazz, was published by Duke University Press.

In December 2008 she brought a capacity crowd at the Apollo Theater to their feet as the closing act of the Jazz concert "Bricktop at the Apollo," hosted by film director Jordan Walker-Pearlman. She sang "Someone To Watch Over Me."

Her 1976 recording, African Songbird was rereleased by Matsuli Music in London, at a launch in Cape Town in July 2013.

This article uses material from the article Sathima Bea Benjamin from the free encyclopedia Wikipedia and it is licensed under the GNU Free Documentation License.

On A Slow Boat To China Ruth Cameron
Update Required To play the media you will need to either update your browser to a recent version or update your Flash plugin.