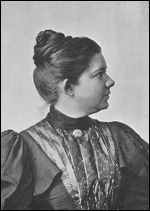 From Wikipedia, the free encyclopedia.
Amy Marcy Cheney Beach (September 5, 1867December 27, 1944) was an American composer and pianist. She was the first successful American female composer of large-scale art music. Most of her compositions and performances were under the name Mrs. H.H.A. Beach.

Amy Beach was born in Henniker, New Hampshire into a distinguished New England family. A child prodigy, she was able to sing forty tunes accurately by age one; by age two she could improvise a countermelody to any melody her mother sang, she taught herself to read at only four years old, and began composing simple waltzes at five years old . She began formal piano lessons with her mother at the age of six, and a year later started giving public recitals, playing works by Handel, Beethoven, Chopin, and her own pieces.

In 1875, Beach's family moved to Boston, where they were advised to enter her into a European conservatory. Her parents opted for local training, hiring Ernst Perabo and later Carl Baermann as piano teachers. At age fourteen, Amy received her only formal training in composition with Junius W. Hill, with whom she studied harmony and counterpoint for a year. Other than this year of training, Amy was self-taught; she often learned by studying classical pieces, such as Bach's The Well-Tempered Clavier.

Beach made her professional debut in Boston in 1883, playing Chopin's Rondo in E-flat and Moscheles's G minor Concerto; shortly after she appeared as a soloist with the Boston Symphony Orchestra. Following her marriage in 1885 to Dr. Henry Harris Aubrey Beach a Boston surgeon 24 years older than she she agreed to limit performances to one public recital a year, with proceeds donated to charity. Following her husband's wishes, she devoted herself to composition. Her first major success was the Mass in E-flat major, which was performed in 1892 by the Handel and Haydn Society. The well-received performance of the Mass moved Beach into the rank of America's foremost composers. She composed the Jubilate for the dedication of the Woman's Building at the Columbian Exposition in 1893.

After her husband died in 1910, Beach toured Europe for three years as a pianist, playing her own compositions. She was determined to establish a reputation there as both a performer and composer. She returned to America in 1914, where she spent time at the MacDowell Colony in Peterborough, New Hampshire. In 1915, she wrote Ten Commandments for Young Composers, which expressed many of her self-teaching principles. Beach later moved to New York, where she became the virtual composer-in-residence at St. Bartholomew's Episcopal Church, New York. She used her status as the top American woman composer to further the careers of young musicians; serving as leader of several organizations, including the Society of American Women Composers as its first president. Heart disease led to Beach's retirement in 1940 and her death in New York City in 1944.

A member of the Second New England School or Boston Group, she is the lone female considered alongside composers John Knowles Paine, Arthur Foote, George Chadwick, Edward MacDowell, George Whiting, and Horatio Parker.[1] Her writing is mainly in a Romantic idiom, often compared to that of Brahms or Rachmaninoff. In her later works she experimented, moving away from tonality, employing whole tone scales and more exotic harmonies and techniques.

Beach's compositions include the Mass in E-flat major (1892), the Gaelic Symphony (1896), a violin sonata, a piano concerto, a piano quintet and a piano trio, several choral and chamber music compositions, piano music (including the Variations on Balkan Themes), approximately 150 songs and the opera Cabildo (1932).

Her sacred choral works include a settings of the Te Deum first performed by the choir of men and boys at Emmanuel Episcopal Church in Boston, St. Francis's Canticle of the Sun first performed at St. Bartholomew's in New York, and a dozen other pieces, which were extensively researched in the 1990s by Betty Buchanan, Musical Director of the Capitol Hill Choral Society in Washington, D.C.

She was most popular, however, for her songs. The Years At the Spring from Three Browning Songs, Op. 44 is perhaps Beachs most well-known work. Despite the volume and popularity of the songs during her lifetime, no single-composer song collection of Beachs works exists. Select works may be purchased through Hildegard Publishing Company and Masters Music Publication, Inc.

On July 9, 2000 at Boston's famous Hatch Shell, the Boston Pops paid tribute to Beach. Her name was added to the granite wall on "The Shell". It joins 86 other composers such as Bach, Handel, Chopin, Debussy, MacDowell, and Beethoven. Amy Beach is the only woman composer on the granite wall. Beach was inducted into the American Classical Music Hall of Fame and Museum in Cincinnati, Ohio on April 24, 1999.[2] In 1994, the Womens Heritage Trail placed a bronze plaque at her Boston Address, and in 1995, Beachs gravesite at Forest Hills Cemetery was dedicated.[3]

This article uses material from the article Amy Beach from the free encyclopedia Wikipedia and it is licensed under the GNU Free Documentation License.

Ain't That A Kick In The Head? Lake Side Jazz Orchestra & Enrico Orlandi
Update Required To play the media you will need to either update your browser to a recent version or update your Flash plugin.