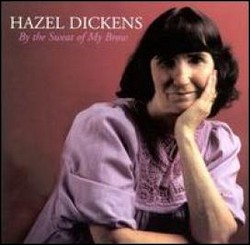 Hazel Jane Dickens (June 1, 1935 – April 22, 2011) was an American bluegrass singer, songwriter, double bassist and guitarist. Her music was characterized not only by her high, lonesome singing style, but also by her provocative pro-union, feminist songs. Cultural blogger John Pietaro noted that "Dickens didnt just sing the anthems of labor, she lived them and her place on many a picket line, staring down gunfire and goon squads, embedded her into the cause." The New York Times extolled her as "a clarion-voiced advocate for coal miners and working people and a pioneer among women in bluegrass music." With Alice Gerrard, Dickens was one of the first women to record a bluegrass album.

Dickens was born in Montcalm,[1] Mercer County, West Virginia on June 1, 1935, the eighth of eleven siblings born to a mining family.[2][3]

In the early 1950s she moved to Baltimore.[3] She met Mike Seeger, younger half-brother of Pete Seeger and founding member of the New Lost City Ramblers and became active in the Baltimore-Washington area bluegrass and folk music scene during the 1960s.

During this time she also established a collaborative relationship with Mike Seeger's wife, Alice Gerrard, and as "Hazel & Alice" recorded two albums for the Folkways label: Who's That Knocking (And Other Bluegrass Country Music) (1965) and Won't You Come & Sing for Me (1973). Dickens and Gerrard were bluegrass bandleaders at a time when the vast majority of bluegrass bands were led by men. Hazel & Alice broke up in 1976 and Dickens pursued a solo career where her music and songwriting became more political.[3]

She appeared in the documentary Harlan County, USA and also contributed four songs to the soundtrack of the same film. She also appeared in the films Matewan and Songcatcher.

Dickens received the Merit Award from the International Bluegrass Music Association in 1994 and was the first woman to do so. In 2001 she was presented with a National Heritage Fellowship by the National Endowment for the Arts.[3]

Hazel Dickens died in 2011, aged 75, from complications of pneumonia.

Extolling that "music saves mountains", fans and supporters of Dickens' activism announced a special memorial, Tribute to West Virginia Music Legend Hazel Dickens at the Charleston, West Virginia Cultural Center on June 5, 2011, four days after what would have been her 76th birthday.

Films in which Dickens appears

Films in which Dickens contributes to the soundtrack

This article uses material from the article Hazel Dickens from the free encyclopedia Wikipedia and it is licensed under the GNU Free Documentation License.