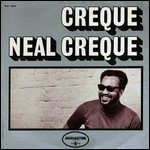 Neal Creque (1940-2000) whose real name was Earl Neal Creque was an American organist and jazz composer, born April 13, 1940 and originally from the Virgin Islands; he was based in the Cleveland area and played frequently around northern Ohio up until his death.[1]

He also composed music with Mongo Santamaría including the Grammy-nominated song "Sofrito" which was sampled by Jennifer Lopez on the album J.Lo..

He was a sought after session musician and his credits include Stanley Turrentine, Teresa Brewer, Leon Thomas, Harold Ousley, Bernard Purdie, and Eddie "Cleanhead" Vinson.

His daughter Nina Creque was part of Gerald Levert's group 1 of the Girls.

This article uses material from the article Neal Creque from the free encyclopedia Wikipedia and it is licensed under the GNU Free Documentation License.