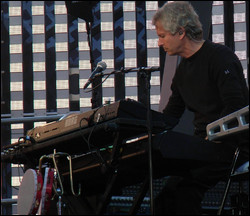 Anthony George "Tony" Banks (born 27 March 1950) is a British composer and multi-instrumentalist, primarily known for being the keyboardist and a founding member of the progressive rock group Genesis. He is one of only two members (the other being bassist/guitarist Mike Rutherford) who have been with Genesis throughout its entire history.

Banks was one of the main composers of Genesis's music, and made major lyrical contributions to the band's songs. As the band's keyboardist he used a variety of instruments, including the ARP Pro Soloist synthesiser, the Mellotron, the Yamaha CP-70, and the Hammond T-102 organ. In the band's earliest years Banks would play acoustic guitar for some of the mellow and pastoral songs.

Outside Genesis, Banks has pursued a solo career, which has included film scoring, pop songs and orchestral music. In 2006, the first Tony Banks biography, Man of Spells by journalist Mario Giammetti, was published in Italy (Edizioni Segno). In 2010, Banks was inducted (as a member of Genesis) into the Rock and Roll Hall of Fame. Banks is ranked number 6 on Digital Dreamdoor's list of "100 Greatest Rock Keyboardists of All Time"[1] and number 11 on MusicRadar's top 27.[2]

Banks was born in East Hoathly, Sussex, England. He received classical training in piano and taught himself to play guitar. He attended Charterhouse School, where he met fellow pupil Peter Gabriel in 1963. Banks originally planned to study mathematics in higher education. After Charterhouse he began studying Chemistry at Sussex University but soon switched to Logic with Physics. After a year at Sussex, he took a leave of absence to explore a full-time career with Genesis and never returned.[3]

Banks and Gabriel, together with drummer Chris Stewart, formed a band called Garden Wall. This band merged with another called Anon, which included Mike Rutherford and Anthony Phillips. They recorded a set of demos which ultimately led to the formation of the band that became Genesis.[3]

Banks's elaborate arrangements and keyboard solos — such as the piano introduction to "Firth of Fifth" and the instrumental sections of "The Cinema Show", "Watcher of the Skies", and "Supper's Ready"— helped to establish Genesis's sound. In addition to playing keyboards, Banks contributed (along with Anthony Phillips, Steve Hackett and Mike Rutherford) to Genesis's 12-string acoustic passages in songs such as "The Musical Box", "Entangled", "The Cinema Show", and the beginning part of "Supper's Ready". Banks also was an occasional back-up vocalist and sang co-lead vocals on "Shepherd," an unreleased track from 1970 which finally surfaced on the Genesis Archive 1967-75 boxed set.

Banks's compositions are credited to be the driving force of Genesis's music, particularly in material recorded before 1979. Notable Banks-penned Genesis songs include "Mad Man Moon," "One for the Vine" and the anthemic ballad "Afterglow", which remained a popular coda to the Banks-driven "medleys" that the group played during live shows for years.

Genesis announced a reunion tour in 2006; when Gabriel declined to perform, it was decided by the band members that the three-person lineup would be more appropriate, and Daryl Stuermer and Chester Thompson were invited to perform. Turn It on Again: The Tour began on 11 June 2007 in Helsinki, and ended on 13 October 2007 at the Hollywood Bowl.

Banks achieved a distinctive sound by running all of his keyboards (as well as his 12-string guitar) into a mixing board and then running the signal output of the board into a Leslie speaker[4] (both the mixer and the rotary speaker were homemade). This can clearly be heard on everything Banks plays on the Genesis Live album.

Banks's earliest setup included a Hammond L-111 organ, a Hohner Pianet N and a Mellotron mkII, all of which (as well as grand piano) are first heard on the Trespass album (except the Hammond, which was replaced with a L-122 model, with a brighter sound than the L-111, used only in the early demo tracks). Banks used the Pianet as both a substitute for a grand piano, and also as a lead instrument, with the use of a fuzz box (also homemade, similar to the Fender Blender). He would often duel with Steve Hackett's guitar, as heard on tracks like "The Musical Box", "The Return of the Giant Hogweed", or "Supper's Ready". Banks in 1974 switched to an RMI 368x Electra Piano and Harpsichord, which was soon integrated into the sound of Genesis, as first heard at various points on The Lamb Lies Down On Broadway album. It was often effected with the homemade fuzz box and an MXR Phase 100 - later these pedals were inserted in the panel of the Electra Piano. After 1978, the RMI was replaced with the Yamaha CP-70 electric grand piano.[4]

The first synthesiser to be used by Genesis was the monophonic ARP Pro Soloist, which Banks first acquired in 1973 along with a Hammond T-102 and a Mellotron M400 instead of the Hammond L122 and the Mellotron mkII.[4] After 1977, Banks ditched the Leslie for another MXR Phase 100 and a Boss CE-1 Chorus effects pedals on his organ. From 1976 from the time of Wind & Wuthering he began to use an ARP 2600 semi-modular synthesizer that he used in studio like on stage until around 1978, and also one of the first polyphonic Synthesizer the Polymoog very present on ...And Then There Were Three... their 1978 album, that gave some new sounds complementing his organ and mellotron. He used this technique all the way up to Duke in 1980. On Abacab in 1981, the organ was no longer featured; organ sounds were emulated using a Sequential Circuits Prophet 10 synthesiser through the Boss CE-1. The Mellotron phased out altogether with the addition of the Roland RS-202 string and brass synthesizer, then the SCI Prophet 10 and the ARP Quadra synthesizer. Since the end of the 1980s, Banks has favoured Roland and Korg synthesizers, where MIDI and sampling technology has allowed him to use a smaller rig to emulate many of the earlier sounds.

Banks has never shown any nostalgia for his older gear, and has always favoured new technology where practical. While the piano has featured throughout his career, both with Genesis and solo, he claims to only have started playing the organ "because it was the only alternative to the piano - it wasn't because I loved the organ!".[5] He only used the Pro Soloist because it was the only synthesizer available to him at the time, and prefers string samples to the Mellotron, calling them "vastly better".[5]

Banks pioneered many unique keyboard and synthesiser sounds throughout his career; music historian Wayne Studer has referred to him as "the most tasteful keyboardist of prog rock.".[6] One of his achievements was the technique of using the trigger output of a LinnDrum drum machine to have the hi-hat pattern trigger an ARP Quadra synthesiser, creating such parts as the pulsating drum sound in "Mama" (from 1983's Genesis) and "By You" on The Fugitive. Another unique synth technique was used on the track "Who Dunnit?" from the 1981 album Abacab; a Sequential Circuits Prophet-5 was programmed with a few sounds, and the patches were switched manually (via the panel preset tabs) while he played.

Banks used a cross-hand playing style in several songs to allow himself to play faster. This is notable on "The Lamb Lies Down on Broadway" and "The Carpet Crawlers". He also used the cross-hand technique on "No Reply At All" (which can be seen briefly in the accompanying music video), "Robbery, Assault and Battery" (also seen in the accompanying music video), "Duke's Travels" and "Fading Lights".

Banks was also a contender to compose the music for The Terminator and was sent the script.

After the departure of Peter Gabriel and guitarist Steve Hackett from Genesis, Banks was the first of the three remaining members of the group to release a solo album. But unlike Phil Collins and Peter Gabriel, who saw great solo success, and Mike Rutherford, who had a hugely successful side career with Mike + the Mechanics, Banks's solo efforts achieved only modest sales. In 1998, fans formed a tribute band called Strictly Banks, and performed a set of Banks's solo songs.

Apart from the album The Fugitive and selected other songs, Banks has employed guest vocalists on his solo albums; these have included (amongst others) Fish, Nik Kershaw, Toyah Willcox, Jack Hues and Jim Diamond.

Classical music was one of Banks's earliest musical influences. He learned to play piano pieces by composers such as Sergei Rachmaninoff and Maurice Ravel and recalls hearing The Planets by Gustav Holst when he was very young. He later became interested in the music of Gustav Mahler after hearing it in the movie Death in Venice. He also cites Dmitri Shostakovich and Erik Satie as composers whose music he has enjoyed. He identifies Symphony No. 4 in A minor and Symphony No. 7 in C major by Jean Sibelius and Ralph Vaughan Williams' Symphony No. 5 in D major as favourite pieces. Critics have noted that Vaughan Williams and film composer John Barry are notable influences on his own orchestral compositions. Banks has acknowledged similarities in style between his orchestral works and those of Vaughan Williams, Sibelius and Barry.[7]

In 2004, Banks released a classical CD entitled Seven: A Suite for Orchestra. Banks's compositions are performed by the London Philharmonic Orchestra, conducted by Mike Dixon, and Banks himself played piano with the orchestra on three tracks. The album received a worldwide release on Naxos Records.

On 26 March 2012, Bankss second classical album was released, entitled Six Pieces for Orchestra, performed by the City of Prague Philharmonic Orchestra. In addition to the orchestra conducted by Paul Englishby, one track features Martin Robertson on alto saxophone, and another features Charlie Siem on violin.[8][9]

A Curious Feeling was remastered into new stereo and 5.1 mixes by Nick Davis and released in 2009 to commemorate the album's 30th anniversary.

While Banks's rig varied from year to year, many pieces of equipment made repeat appearances. In addition, the rig sometimes changed between an album and the subsequent tour. Below are lists of the various rigs that Banks used live and on each album.

This article uses material from the article Tony Banks (musician) from the free encyclopedia Wikipedia and it is licensed under the GNU Free Documentation License.

Snowbound Bruce Harris
Update Required To play the media you will need to either update your browser to a recent version or update your Flash plugin.