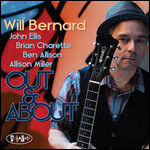 Bernard has played with many musicians including Jai Uttal and the Pagan Love Orchestra, The Coup, Robert Walter's 20th Congress, Frequinox, Idris Muhammad, Dr. Lonnie Smith, Zigaboo Modeliste, Groundation and the Stanton Moore Trio.[2] [3] In January 2008 Bernard recorded his second album with the Palmetto label including John Medeski on keyboards, Stanton Moore on drums and Andy Hess on bass which was released as Blue Plate Special.[4]

This article uses material from the article Will Bernard from the free encyclopedia Wikipedia and it is licensed under the GNU Free Documentation License.

Tishomingo Blues Vufflens Jazz Band
Update Required To play the media you will need to either update your browser to a recent version or update your Flash plugin.