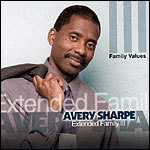 Sharpe began playing piano at age eight and also studied accordion in his youth. He learned both electric and acoustic bass as a teenager, then studied with Reggie Workman at the University of Massachusetts Amherst. He played with Wynton Marsalis and Pat Metheny before joining McCoy Tyner's sextet; from 1984 through 2002 he played with Tyner's trio. He has also played as a sideman with Archie Shepp, Yusef Lateef, Ricky Ford, Joe Ford, and others. As a leader, he has release on Sunnyside Records, and several albums on his own label, JKNM.

Although not as well known as Ron Carter or Christian McBride, he is remarkably versatile as a bassist. A switch-hitter on bass guitar and upright bass, his humming-and-bowing, à la Slam Stewart, as well as his chord work on stand-up bass make quite an impression when seeing and hearing him live.

This article uses material from the article Avery Sharpe from the free encyclopedia Wikipedia and it is licensed under the GNU Free Documentation License.

You'd Be Surprised David Klein Quintet & Miriam Klein
Update Required To play the media you will need to either update your browser to a recent version or update your Flash plugin.