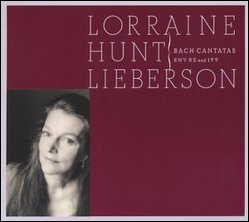 Lorraine Hunt Lieberson (March 1, 1954 – July 3, 2006) was an American mezzo-soprano, known for the dramatic power of her vocal artistry as well as her commitment to performing infrequently-heard Baroque era and contemporary works. Her career path to becoming a singer was unconventional formerly a professional violist, Lieberson did not shift her full-time focus to singing until she was in her thirties. Her career as a vocalist was shortened further by her illness and eventual death from breast cancer at the age of 52.

Her parents were both involved with opera in the San Francisco Bay Area; her mother, Marcia, was a contralto and music teacher and her father, Randolph, taught music in high school and college. She performed as a child in Engelbert Humperdinck's Hänsel & Gretel, as a gingerbread boy. She returned to opera after doing a charity performance of the same work at a prison, this time taking Hänsel's role.[1] After this performance, she auditioned for the Met, at age 29.

While rehearsing in his opera Ashoka's Dream at Santa Fe in 1997, she met composer Peter Lieberson and married him two years later, changing her name to Lorraine Hunt Lieberson.[2]Peter Lieberson flourished creatively in their relationship, composing for her Rilke Songs and Neruda Songs,[3] both of which were issued in recordings.

She died after a long battle with breast cancer on July 3, 2006, at the age of 52 in Santa Fe, New Mexico. Only a few years previously, she had nursed her sister through her final illness with the same disease.[4] Her husband, Peter, fell ill with cancer the following year, dying in April 2011.[5]

Hunt Lieberson began her musical career as a violist, and became principal viola with the San Jose Symphony. At age 26, she turned to studying voice seriously at the Boston Conservatory of Music. Her professional career as a singer began in 1984, and in 1985 she made her operatic debut after meeting Peter Sellars and appearing in his 1985 production of Handel's Giulio Cesare. She began her career as a soprano, singing roles such as Handel's Theodora and Donna Elvira in Sellars' notorious production of Don Giovanni, but soon gravitated to the mezzo-soprano range. She began working with Craig Smith at Emmanuel Music as a violist, then sang in the chorus and began taking leading roles.[6] Her work with Emmanuel continued throughout the 1980s and 1990s, and a recording of her work there in Bach and Handel was released in 2008 by Avie Records, "Lorraine at Emmanuel."

Her debut performance at the Metropolitan Opera came during the 1999-2000 season, in eleven performances in the role of Myrtle Wilson in the world premiere of John Harbison's The Great Gatsby (first performance on December 20, 1999). During this same season, she also appeared as Sesto in the New York City Opera's production of Mozart's La clemenza di Tito, as well playing La Pelerin in Kaija Saariaho's Clemence at the Salzburg Festival. Her only other appearances at the Met came in two gala performances where she sang the spiritual Deep River (1999), and the fourth act of Bizet's Carmen in 2000, and finally four performances in February, 2003 in the role of Dido in Berlioz's 'Les Troyens. Prior to her death, she was scheduled to sing the role of Orfeo in a new production of Gluck's Orfeo ed Euridice. She was replaced by countertenor David Daniels, and the four performance run in May 2007 was dedicated to her memory.

She made a number of recordings, including works of Bach and Handel, as well as modern works.

Critical opinions of her work, both in live performance and in recordings, have generally been high. Most reviewers make note of her beautiful tone and controlled style.

Those who worked with Hunt Lieberson have spoken of her intense commitment to the detail of bringing a piece to life. Canadian vocal coach Denise Massé said in a New Yorker magazine interview, Lorraine is like Callas in her determination to dig as deeply as possible into the character to find all the grain in the wood.

In June 2005, she made her last appearance in Amsterdam, performing the Sellars staging of Bach's Ich habe genug, of which personal recordings are available.[7] Her final public performances were given on March 16, 17, and 18, 2006, at Orchestra Hall in Chicago. She performed in Mahler's Symphony No. 2 (Resurrection) with the Chicago Symphony Orchestra and Chorus; Michael Tilson Thomas was the conductor and Celena Shafer was the soprano soloist.

Besides those mentioned above, her most recent recordings include two of Johann Sebastian Bach's Cantatas, #82 (Ich habe genug) and #199 (Mein Herze schwimmt im Blut), which made the New York Times top 10 classical albums of the year and No. 3 on the Billboard classical chart. She also recorded a CD of George Frideric Handel's Arias. Musical America recognized her as the 2001 Vocalist of the Year.

This article uses material from the article Lorraine Hunt Lieberson from the free encyclopedia Wikipedia and it is licensed under the GNU Free Documentation License.

I Believe To My Soul Ida Sand With Stockholm Underground
Update Required To play the media you will need to either update your browser to a recent version or update your Flash plugin.