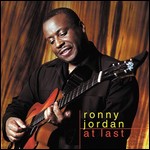 Robert Laurence Albert Simpson, known as Ronny Jordan (29 November 1962 – 13 January 2014)[1] was a British guitarist and part of the acid jazz movement at the end of the twentieth century.[2] Jordan described his music as "urban jazz," a blend of jazz, hip-hop, and R&B.[3]

He came to prominence after being featured on Guru's Jazzmatazz, Vol. 1, released in 1993. He was also one of the artists whose recordings are featured on Stolen Moments: Red Hot + Cool—a compilation album released in 1994 to benefit the Red Hot Organization.

Following 1992's The Antidote,[2] recordings from Jordan have featured on the Billboard charts, especially his acid-jazz Miles Davis cover of "So What", which was a worldwide hit. He was also the recipient of The MOBO Best Jazz Act Award and the Gibson Guitar Best Jazz Guitarist Award. His 2000 release, A Brighter Day, was nominated for the Grammy Award for Best Contemporary Jazz Album.

Jordan's song "The Jackal" (from his 1993 album The Quiet Revolution) gained prominence when actress Allison Janney in the role of C. J. Cregg lip-synched it in the episode "Six Meetings Before Lunch" of The West Wing. She also did so on Arsenio Hall's television show in September 2013.

London Lowdown consists of "Light On The Thames" and "Brixton Carnival".

This article uses material from the article Ronny Jordan from the free encyclopedia Wikipedia and it is licensed under the GNU Free Documentation License.

Pescados frescos Roof Groove Big Band
Update Required To play the media you will need to either update your browser to a recent version or update your Flash plugin.