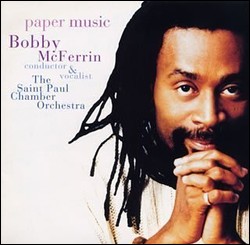 Robert Keith McFerrin Jr. (born March 14, 1950) is an American jazz vocalist and conductor. A ten-time Grammy Award winner, he is known for his unique vocal techniques, such as singing fluidly but with quick and considerable jumps in pitch—for example, sustaining a melody while also rapidly alternating with arpeggios and harmonies—as well as scat singing, polyphonic overtone singing, and improvisational vocal percussion. He is widely known for performing and recording regularly as an unaccompanied solo vocal artist. He has frequently collaborated with other artists from both the jazz and classical scenes.

McFerrin's song "Don't Worry, Be Happy" was a No. 1 U.S. pop hit in 1988 and won Song of the Year and Record of the Year honors at the 1989 Grammy Awards. McFerrin has also worked in collaboration with instrumentalists, including pianists Chick Corea, Herbie Hancock, and Joe Zawinul, drummer Tony Williams, and cellist Yo-Yo Ma.

As a vocalist, McFerrin often switches rapidly between modal and falsetto registers to create polyphonic effects, performing both the main melody and the accompanying parts of songs. He makes use of percussive effects created both with his mouth and by tapping on his chest. McFerrin is also capable of multiphonic singing.[1][2]

A document of McFerrin's approach to singing is his 1984 album The Voice, the first solo vocal jazz album recorded with no accompaniment or overdubbing.[3]

McFerrin's first recorded work, the self-titled album Bobby McFerrin, was not produced until 1982, when McFerrin was already 32 years old. Before that, he had spent six years developing his musical style, the first two years of which he attempted not to listen to other singers at all, in order to avoid sounding like them. He was influenced by Keith Jarrett, who had achieved great success with a series of improvised piano concerts including The Köln Concert of 1975, and wanted to attempt something similar vocally.[4]

In 1984 McFerrin performed onstage at the Playboy Jazz Festival in Los Angeles as a sixth member of Herbie Hancock's VSOP II sharing horn trio parts with the Marsalis Brothers.

In 1988, McFerrin recorded the song "Don't Worry, Be Happy", which became a hit and brought him widespread recognition across the world. The song's success "ended McFerrin's musical life as he had known it," and he began to pursue other musical possibilities on stage and in recording studios.[5] The song was used in George H. W. Bush's 1988 U.S. presidential election as Bush's 1988 official presidential campaign song, without Bobby McFerrin's permission or endorsement. In reaction, Bobby McFerrin publicly protested that particular use of his song, including stating that he was going to vote against Bush, and completely dropped the song from his own performance repertoire, to make the point even clearer.[6]

At that time, he performed on the PBS TV special Sing Out America! with Judy Collins. McFerrin sang a Wizard of Oz medley during that television special.

In 1989, he composed and performed the music for the Pixar short film Knick Knack. The rough cut to which McFerrin recorded his vocals had the words "blah blah blah" in place of the end credits (meant to indicate that he should improvise). McFerrin spontaneously decided to sing "blah blah blah" as lyrics, and the final version of the short film includes these lyrics during the end credits. Also in 1989, he formed a ten-person "Voicestra" which he featured on both his 1990 album Medicine Music and in the score to the 1989 Oscar-winning documentary Common Threads: Stories from the Quilt. The song "Common Threads" has frequently reappeared in some public service advertisements about AIDS. McFerrin also performed with the Vocal Summit. A modified version of the song Thinkin' About Your Body (as Thinkin' About Your Chocolate) from the album Spontaneous Inventions was used in a series of UK Cadbury's chocolate adverts in 1989/1990.[7][8]

As early as 1992, widespread rumors circulated that falsely claimed McFerrin committed suicide. The rumors intentionally made fun of the distinctly positive nature of his popular song "Don't Worry, Be Happy" by claiming McFerrin took his own life.[9]

In 1993, McFerrin sang Henry Mancini's "Pink Panther" theme for the movie Son of the Pink Panther.

For a few years in the late 1990s, he toured a concert version of Porgy and Bess, partly in honor of his father, who sang the role for Sidney Poitier in the 1959 film version, and partly "to preserve the score's jazziness" in the face of "largely white orchestras" who tend not "to play around the bar lines, to stretch and bend". McFerrin says that because of his father's work in the movie, "This music has been in my body for 40 years, probably longer than any other music."[10]

McFerrin also participates in various music education programs and makes volunteer appearances as a guest music teacher and lecturer at public schools throughout the U.S. McFerrin has collaborated with his son, Taylor, on various musical ventures.

In July 2003, McFerrin was awarded an Honorary Doctorate of Music from Berklee College of Music during the Umbria Jazz Festival where he conducted two days of clinics.[11]

In 2009, McFerrin and musician-scientist (Psychologist) Daniel Levitin served as co-hosts of The Music Instinct, a two-hour award-winning documentary produced by PBS and based on Levitin's best-selling book This Is Your Brain on Music. Later that year, the two appeared together on a panel at the World Science Festival, where McFerrin demonstrated audience participation with the ubiquitous nature of human understanding of the pentatonic scale by singing and dancing, and having the audience sing while following his movements.[12]

McFerrin married Debbie Green in 1975. They have three children, Taylor, Jevon, and Madison. Jevon is an actor and currently an alternate and standby in Hamilton: An American Musical on Broadway.[13][14] McFerrin's daughter, Madison McFerrin, is a singer-songwriter. Madison attended the Berklee College of Music. She has two projects, Finding Foundations Vol. I and II, to her name.[15]

This article uses material from the article Bobby McFerrin from the free encyclopedia Wikipedia and it is licensed under the GNU Free Documentation License.