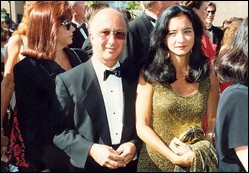 Shaffer was born and raised in Fort William (now part of Thunder Bay), Ontario, Canada, the son of Shirley and Bernard Shaffer, a lawyer.[4] Shaffer was raised in a Jewish family. As a child, Shaffer took piano lessons, and in his teenage years played the organ in a band called Fabulous Fugitives with his schoolmates in Thunder Bay. Later he performed with the "Flash Landing Band" at different venues around Edmonton and the interior of B.C. Educated at the University of Toronto, he began playing with jazz guitarist Tisziji Muñoz, performing in bands around the bars there, where he found an interest in musicals, and completed his studies, with a B.A. degree in sociology in 1971.[5]

Shaffer began his music career in 1972 when Stephen Schwartz invited him to be the musical director for the Toronto production of Godspell,[1] starring Victor Garber, Gilda Radner, Martin Short, Eugene Levy, Dave Thomas and Andrea Martin. He went on to play piano for the Schwartz Broadway show The Magic Show in 1974, then became a member of the house band on NBC's popular Saturday Night Live (SNL) television program from 1975 to 1980 (except for a brief departure in 1977). Though Shaffer was at the piano and appeared to be directing the band's actions, Howard Shore was credited as SNL's musical director, eventually turning the actual conducting of the band to sax player Howard Johnson. Shaffer also regularly appeared in the show's sketches, notably as the pianist for Bill Murray's Nick the Lounge Singer character, and as Don Kirshner. He also appeared as a keyboardist on the 1978 album, Desire Wire, recorded by pop/rock star, musician and backing vocalist Cindy Bullens.

Shaffer occasionally teamed up with the Not Ready for Prime-Time Players off the show as well, including work on Gilda Radner's highly successful Broadway show and as the musical director for John Belushi and Dan Aykroyd whenever they recorded or performed as The Blues Brothers. Shaffer was to appear in the duo's 1980 film, but, as he revealed in October 2009 on CBS Sunday Morning, Belushi dropped him from the project. In a memo to fellow SNL colleagues, Belushi said that he was unhappy that Shaffer was spending so much time on a studio record for Radner. Belushi said that he had tried to talk Shaffer out of working on the album in the first place in order to avoid sharing Shaffer's talents with another SNL-related project.[6] Shaffer later reported that he was in (unrequited) love with Gilda Radner.[7] He would go on to appear in 1998's Blues Brothers 2000.

Beginning in 1982, Shaffer served as musical director for David Letterman's late night talk shows: as leader of "The World's Most Dangerous Band" for Late Night with David Letterman (1982–1993) on NBC, for which he also composed the theme song, and as leader of the CBS Orchestra for the Late Show with David Letterman (1993–2015) on CBS. Letterman consistently maintained that the show's switch to CBS was because NBC "fired Paul for stealing pens" or some other facetious reason. Shaffer guest-hosted the show twice when Letterman was unavailable, including during Letterman's January 2000 medical leave for quintuple heart bypass surgery, and during the birth of Letterman's son Harry in November 2003.

In 1984, Shaffer played keyboards for The Honeydrippers, a group formed in 1981 by former Led Zeppelin frontman Robert Plant, on their only studio album, The Honeydrippers: Volume One. The album included the hit single "Sea of Love" which reached No. 1 on Billboard's adult contemporary chart in 1984 and No. 3 on its Hot 100 chart in 1985.[8]

Shaffer has served as musical director and producer for the Rock and Roll Hall of Fame induction ceremony since its inception in 1986 and filled the same role for the 1996 Olympic Games closing ceremonies from Atlanta, Georgia. Shaffer also served as musical director for Fats Domino and Friends, a Cinemax special that included Ray Charles, Jerry Lee Lewis and Ron Wood.

In 2017, Shaffer reunited with his band, resuming its previous name, and recorded the self-titled album Paul Shaffer & the World's Most Dangerous Band. Shaffer and the band released their album in March and then went on tour as well as making appearances on both Jimmy Kimmel Live and The Late Show with Stephen Colbert, for which Shaffer and the band returned to the Ed Sullivan Theater for the first time since Letterman's finale two years earlier.[9][10][11][12]

Shaffer has appeared in a number of motion pictures over the years, including a small role (Artie Fufkin of Polymer Records) in Rob Reiner's This Is Spinal Tap, Blues Brothers 2000, a scene with Miles Davis in the Bill Murray film Scrooged, and as a passenger in John Travolta's taxicab in Look Who's Talking Too. In addition, Shaffer lent his voice to Disney's animated feature and television series Hercules, as the character Hermes.

In 1977, Shaffer left SNL for a few months to co-star with Greg Evigan in A Year at the Top, a short-lived CBS sitcom in which Shaffer and Evigan play two musicians from Idaho who relocate to Hollywood where they are regularly tempted by a famous promoter (who is actually the devil's son), played by Gabriel Dell, to sell their souls in exchange for a year of stardom. Though the series only lasted a few episodes, a soundtrack album was released.

Following the series' cancellation, Shaffer returned to SNL. In the fall of 1979, Shaffer became the first person to say "fuck" on SNL.[13] That year, SNL parodied The Troggs Tapes with a medieval musical sketch featuring Shaffer, Bill Murray, Harry Shearer, and a "special guest appearance" by John Belushi (who had left the show the previous spring). In the middle of a long tirade which featured repeated use of the word "flogging," Shaffer inadvertently uttered the forbidden word. It not only escaped the censors in the live broadcast and the West Coast taped airing, but also reappeared in the summer rerun, and even in the syndicated versions of the show for several years. Shaffer, at Letterman's urging, related the story on the very first episode of Late Night.

In 1977, Shaffer played on the Mark & Clark Band's hit record Worn Down Piano.

Shaffer recorded the famous synthesizer solo in the 1982 hit "Goodbye to You" by the band Scandal. He used his Oberheim OB-Xa to emulate a 1960s organ sound.[14]

The following year, he appeared in Blues Traveler's video for the song "Hook".

Shaffer also appeared, with very small and funny cameos, in the sci-fi fantasy movie Star Trek: First Contact in 1997 and, in 1992, in the sport comedy movie with James Woods, Diggstown. Around 1998 he was on Hollywood Squares.

In 2001, Shaffer hosted the VH1 game show Cover Wars with DJ/model Sky Nellor. The show featured cover bands competing for the ultimate series win. Each week, Shaffer would sign off with, "Just because you're in a cover band, it doesn't mean you're not a star." The show lasted 13 episodes and featured celebrity judges including Kevin Bacon, Nile Rodgers, Cyndi Lauper and Ace Frehley.

Shaffer served as musical director for 2001's The Concert for New York City, and accompanied Adam Sandler's Opera Man sketch and the Backstreet Boys' "Quit Playing Games (with My Heart)".

In 2002, a street which surrounds the Thunder Bay Community Auditorium in his hometown was renamed Paul Shaffer Drive. Shaffer has also received two honorary doctorates, including one from Lakehead University.

Since 2002, he has been the national spokesperson for Epilepsy Canada. On September 29, 2005, Shaffer made a major contribution to Lakehead University to dedicate the fifth floor ATAC boardroom to his father Bernard Shaffer, inaugural member of the Board of Governors. In June 2006, he received a star on Canada's Walk of Fame.

In 2005, along with Steven Van Zandt, he organized a benefit for Mike Smith (formerly of The Dave Clark Five), who had suffered a paralysing fall at his home in Spain. Shaffer cites Mike Smith as an early influence.

In 2008, Shaffer made a cameo appearance at the beginning of the Law & Order: Criminal Intent season 7 episode "Vanishing Act".

Shaffer's memoir, We'll Be Here for the Rest of Our Lives: A Swingin' Show-biz Saga (co-authored by David Ritz) was published on October 6, 2009. The same day, he made an appearance as a guest on The Late Show.

Shaffer never returned the call from Jerry Seinfeld that offered him the role of George Costanza in Seinfeld. Shaffer never auditioned for the role, Seinfeld simply called to offer him the job.[18]

In 2010, Shaffer appeared with Bachman & Turner at the Roseland Ballroom in New York. His appearance was included on the live album recorded on that date.

In February 2013, he appeared in an episode of the sitcom How I Met Your Mother titled "P.S. I Love You", in which it is revealed that the character of Robin (Cobie Smulders) used to be obsessed with him. The letters "P.S." in the episode title refer to Paul Shaffer.

In May 2015, the Ride of Fame honoured Paul Shaffer with a double decker sightseeing bus in New York City to commemorate his long run as the leader of the CBS Orchestra for the Late Show with David Letterman.[19]

Shaffer was the musical director for A Very Murray Christmas, a 2015 Netflix variety special starring Bill Murray in which Shaffer also appears and performs extensively.[20]

In October 2017, Shaffer returned to the late night stage to perform with the band on Jimmy Kimmel Live.[21]

This article uses material from the article Paul Shaffer from the free encyclopedia Wikipedia and it is licensed under the GNU Free Documentation License.

Forget Me Sandy Patton
Update Required To play the media you will need to either update your browser to a recent version or update your Flash plugin.