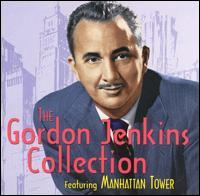 Gordon Hill Jenkins (May 12, 1910 – May 1, 1984) was an American arranger, composer and pianist who was an influential figure in popular music in the 1940s and 1950s, renowned for his lush string arrangements. Jenkins worked with The Andrews Sisters, Johnny Cash, The Weavers, Frank Sinatra, Louis Armstrong, Judy Garland, Nat King Cole, Billie Holiday, Harry Nilsson, and Ella Fitzgerald, among others.

Gordon Jenkins was born in Webster Groves, Missouri. He began his career doing arrangements for a St. Louis radio station. He was then hired by Isham Jones, the director of a dance band known for its ensemble playing, which gave Jenkins the opportunity to develop his skills in melodic scoring. He also conducted The Show Is On on Broadway.[1]

After the Jones band broke up in 1936, Jenkins worked as a freelance arranger and songwriter, contributing to sessions by Isham Jones, Paul Whiteman, Benny Goodman, Andre Kostelanetz, Lennie Hayton, and others. In 1938, Jenkins moved to Hollywood and worked for Paramount Pictures and NBC, and then became Dick Haymes' arranger for four years.[2] In 1944, Jenkins had a hit song with "San Fernando Valley". In the 1940s, he was music director for the radio version of the program Mayor of the Town,[3] and his orchestra provided the music for Ransom Sherman's program on CBS.[4]

The liner notes to Verve Records' 2001 reissue of one of Jenkins' albums with Armstrong, Satchmo In Style, quote Decca's onetime A & R Director, Milt Gabler, saying that Jenkins "stood up on his little podium so that all the performers could see him conduct. But before he gave a downbeat, Gordon made a speech about how much he loved Louis and how this was the greatest moment in his life. And then he cried."

During this time, Jenkins also began recording and performing under his own name. One of his enduring works while at Decca was a pair of Broadway-style musical vignettes, Manhattan Tower and "California" which saw release several times (78s, 45s, and LP) in the '40s and '50s. The two were paired on a very early Decca LP in 1949, and Jenkins was given the Key to New York City by its mayor when Jenkins's orchestra performed the 16-minute suite on The Ed Sullivan Show in the early '50s. Manhattan Tower was also a Patti Page LP album, issued by Mercury Records as catalog number MG-20226 in 1956. It is her version of Gordon Jenkins' popular 1948/1956 Manhattan Tower suite and the album charted at #18 on the Billboard charts. The album was reissued, combined with the 1956 Patti Page album You Go to My Head, in compact disc format, by Sepia Records on September 4, 2007. Jenkins also made a rare excursion into film work in 1952 when he scored the action film Bwana Devil, the first 3-D movie shot in color.

His Seven Dreams released in 1953 included "Crescent City Blues" which was the source for Johnny Cash's immensely popular recording, "Folsom Prison Blues". In 1956, he expanded Manhattan Tower to almost three times its length, released it (this time on Capitol Records), and performed it on an hour-long television show. (Both versions of "Manhattan Tower" are currently available on CD.) His final long-form work was The Future, which made up the entire third disk of Frank Sinatra's 1980 Grammy-nominated Trilogy album. Although the piece was savaged by critics, Sinatra reportedly loved the semi-biographical work and felt that Jenkins was treated unfairly by the media.

Jenkins headlined New York's Capitol Theater between 1949 and 1951 and the Paramount Theater in 1952. He appeared in Las Vegas in 1953 and many times thereafter.[6] He worked for NBC as a TV producer from 1955 to 1957, and performed at the Hollywood Bowl in 1964. By 1949, Jenkins was musical director at Decca, and he signed – despite resistance from Decca's management – the Weavers, a Greenwich Village folk ensemble that included Pete Seeger among its members. The combination of the Weavers' folk music with Jenkins' orchestral arrangements became immensely popular, to the surprise of everyone involved. Their most notable collaboration was a version of Lead Belly's "Goodnight Irene" (1950) backed by Jenkins' adaptation of the Israeli folk song, "Tzena, Tzena, Tzena". Other notable songs they recorded together are "The Roving Kind", "On Top of Old Smoky" (1951), and "Wimoweh" (1952).

After a brief stint with RCA's "X" records,[7] Jenkins later moved to Capitol Records where he worked with Frank Sinatra, notably on the albums Where Are You? (1957) and No One Cares (1959), and Nat King Cole, with whom he had his greatest successes; Jenkins was responsible for the lush arrangements on the 1957 album Love Is the Thing (Capitol's first stereo release, which included "When I Fall in Love", one of Cole's best-known recordings), as well as the albums The Very Thought of You (1958) and Where Did Everyone Go? (1963). Jenkins also wrote the music and lyrics for Judy Garland's 1959 album The Letter which also featured vocalist Charles LaVere, and conducted several of Garland's London concerts in the early 1960s.

Whilst most of Jenkins' arrangements at Capitol were in his distinctive string-laden style, he continued to demonstrate more versatility when required, particularly on albums such as A Jolly Christmas From Frank Sinatra (1957), which opens with a swinging version of Jingle Bells, and Nat King Cole's album of spirituals, Every Time I Feel The Spirit (1960), which includes several tracks with a pronounced 2 4 {\displaystyle \textstyle {\frac {2}{4}}} beat that might almost be described as rock. He also produced a diverse set of charts for his critically acclaimed 1960 album Gordon Jenkins Presents Marshal Royal, a jazz-pop crossover project with Count Basie's alto saxophonist which included both strings and a swinging rhythm section.

However, as rock and roll gained ascendancy in the 1960s, Jenkins' lush string arrangements fell out of favor and he worked only sporadically. However, Sinatra, who had left Capitol to start his own label, Reprise Records, continued to call upon the arranger's services at various intervals over the next two decades, on albums such as All Alone (1962), September of My Years (1965), for which Jenkins won a Grammy, Ol' Blue Eyes Is Back (1973), and She Shot Me Down (1981). The latter is regarded by many "Sinatraphiles" as the singer's last great work. Jenkins also worked with Harry Nilsson, arranging and conducting A Little Touch of Schmilsson in the Night (1973), an album of jazz standards. The Nilsson sessions, with Jenkins conducting, were recorded on video and later broadcast as a television special by the BBC.

Although best known as an arranger, Jenkins also wrote several well-known songs, including "P.S. I Love You", "Goodbye" (Benny Goodman's sign-off tune), "Blue Prelude" (with Joe Bishop), "This Is All I Ask", and "When a Woman Loves a Man". Jenkins also composed the "Future" suite for Sinatra's 1980 concept album Trilogy: Past Present Future, and scored the music for the 1980 film The First Deadly Sin, which starred Sinatra in his last major film role.

Jenkins married high school sweetheart Nancy Harkey in 1931 and had three children: Gordon Jr., Susan, and Page. In 1946, he divorced Harkey and married Beverly Mahr, one of the singers in his band. They had a son, Bruce.

Toward the end of his life, he was in a near-fatal automobile accident, which left him severely debilitated. Nonetheless, he rallied himself for work, conducting a full orchestra for a recording session in spite of his pain.

In 1966, Jenkins received a Grammy Award for Best Instrumental Arrangement Accompanying Vocalist(s) for Frank Sinatra's rendition of the song "It Was a Very Good Year."[6]

Orchestrations for other artists

This article uses material from the article Gordon Jenkins from the free encyclopedia Wikipedia and it is licensed under the GNU Free Documentation License.

What A Difference A Day Made Albert Mangelsdorff Sextet
Update Required To play the media you will need to either update your browser to a recent version or update your Flash plugin.