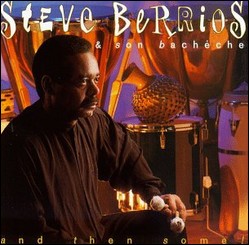 Starting out on trumpet while in public school, he was influenced by his father, a professional drummer, and his neighbors in Upper Manhattan: Tito Puente, Willie Bobo and Mongo Santamaria. At 16, he began winning talent and trumpet contests, including the famed Apollo Theatre competitions, in which he placed first no less than five times. Switching his focus to drums and percussion, he started touring and recording with Mongo Santamaria at age 19.

He learned to play batá sacred drums from Julito Collazo. He played conga, djembe, cowbells, marimba, timpani and glockenspiel in Dizzy Gillespies band on a good-will tour of Cuba in the 1980s. In 1981, he became a founding member of the milestone Latin jazz group Jerry González & the Fort Apache Band. Berrios recorded more than a dozen albums as a member of the Fort Apache Band, including The River Is Deep (1982), Obatala (1988), Rumba Para Monk (1988) Earthdance (1990) and Moliendo Café (1991). He was also in Max Roach's M'Boom, a percussion group that Roach created.

He also led his own group, Son Bacheche. And Then Some! (1997), one of the few albums he recorded at the head of his own group, was nominated for a Grammy for Best Latin Jazz Performance.

With The Harlem Experiment

This article uses material from the article Steve Berrios from the free encyclopedia Wikipedia and it is licensed under the GNU Free Documentation License.