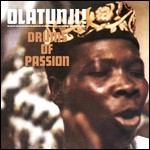 Olatunji was born in the village of Ajido, near Badagry, Lagos State, in southwestern Nigeria. A member of the Yoruba people, Olatunji was introduced to traditional African music at an early age. He read in Reader's Digest magazine about the Rotary International Foundation's scholarship program, and applied for it. He went to the United States of America in 1950.

Olatunji received a Rotary scholarship in 1950 and was educated at Morehouse College in Atlanta, Georgia, where he desired to, but never sang in the Morehouse College Glee Club.[1] Olatunji was a good friend of Glee Club director Dr. Wendell P. Whalum and collaborated with him on a staple of the choir's repertoire, "Betelehemu", a Nigerian Christmas carol. After graduating from Morehouse, he went on to New York University to study public administration. There, he started a small percussion group to earn money on the side while he continued his studies.[2]

Olatunji won a following among jazz musicians, notably creating a strong relationship with John Coltrane, with whose help he founded the Olatunji Center for African Culture in Harlem. This was the site of Coltrane's final recorded performance. Coltrane wrote the composition "Tunji" on the 1962 album Coltrane in dedication to him. Olatunji recorded with many other prominent musicians (often credited as "Michael Olatunji"), including Cannonball Adderley (on his 1961 African Waltz album), Horace Silver, Quincy Jones, Pee Wee Ellis, Stevie Wonder, Randy Weston, and with Max Roach and Abbey Lincoln on the pivotal Freedom Now Suite aka We Insist!, and with Grateful Dead member Mickey Hart on his Grammy winning Planet Drum projects. He is also mentioned in the lyrics of Bob Dylan's "I Shall Be Free" as recorded on the album The Freewheelin' Bob Dylan.

In 1969, Carlos Santana had a major hit with his cover version of this first album's "Jin-go-lo-ba", which Santana recorded on his debut album, Santana, as "Jingo". Olatunji's subsequent recordings include Drums of Passion: The Invocation (1988), Drums of Passion: The Beat (1989) (which included Airto Moreira and Carlos Santana), Love Drum Talk (1997), Circle of Drums (2005; originally titled Cosmic Rhythm Vibrations, with Muruga Booker and Sikiru Adepoju), and Olatunji Live at Starwood (2003 – recorded at the 1997 Starwood Festival [1]) with guest Halim El-Dabh. He also contributed to Peace Is The World Smiling: A Peace Anthology For Families on the Music For Little People label (1993).

Olatunji composed music for the Broadway theatrical and the 1961 Hollywood film productions of Raisin in the Sun. He assisted Bill Lee with the music for his son Spike Lee's hit film She's Gotta Have It.

Olatunji was known for making an impassioned speech for social justice before performing in front of a live audience. His progressive political beliefs are outlined in The Beat of My Drum: An Autobiography, with a foreword by Joan Baez, (Temple University Press, 2005). He toured the American south with Rev. Martin Luther King Jr and joined King in the march on Washington.

When he performed before the United Nations General Assembly, Soviet Premier Nikita Khrushchev took off his shoes and danced. Later, he was one of the first outside performers to perform in Prague at Václav Havel's request. On July 21, 1979, he appeared at the Amandla Festival along with Bob Marley, Dick Gregory, Patti LaBelle and Eddie Palmieri, amongst others.

Olatunji was a music educator, and invented a method of teaching and recording drum patterns which he called the "Gun-Dun, Go-Do, Pa-Ta" method after the different sounds made on the drum. He taught drum and dance workshops year-round starting in the late 1950s. Over the years he presented workshops nationally and internationally at colleges, universities, civic, cultural, and governmental organizations.

He co-wrote Musical Instruments of Africa: Their Nature, Use and Place in the Life of a Deeply Musical People with Betty Warner-Dietz (John Day Company, 1965). He taught a summer drumming and African dance course with his wife, at the Omega Institute in Rhinebeck, New York for many summers during Family week. He also taught at the Esalen Institute in California beginning in 1985.

For the few years before his death Olatunji made his home at the wild Big Sur coastline. He became a scholar-in-residence at the Esalen Institute. During this time, he already suffered severely from diabetes and was assisted by Nora Arjuna, Leo Thompson and Leon Ryan until shortly before his death in Salinas, California in 2003 from diabetes, on the day before his 76th birthday.

This article uses material from the article Babatunde Olatunji from the free encyclopedia Wikipedia and it is licensed under the GNU Free Documentation License.