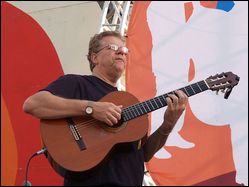 Romero Lubambo started learning classic piano at a very early age. At 13, he started learning the classic guitar, studying at the Villa-Lobos Music School. At the same time he studied engineering at PUC University in Rio de Janeiro. Since 1985, he has lived in the USA and played and recorded with names as Astrud Gilberto, Dianne Reeves, Michael Brecker, Al Jarreau, Kathleen Battle, Herbie Mann, Ivan Lins, Flora Purim e Airto, Paquito DRivera, Harry Belafonte, Grover Washington, Jr., Luciana Souza, Sergio Assad, Dave Douglas and Odair Assad, Leny Andrade e Cesar Camargo Mariano. Recently he has been playing with Trio da Paz. One of his most well-known and well-loved contributions is as the guitar/percussion near-orchestra he provides to Yo-yo Ma and Paquito D'Rivera on "Doce de Coco" on Ma's Apassionata CD; while the cello and clarinet answer each other seamlessly, the steady rhythm they seek, the bass, and the grace notes are all provided by Lubambo's fingering.

This article uses material from the article Romero Lubambo from the free encyclopedia Wikipedia and it is licensed under the GNU Free Documentation License.