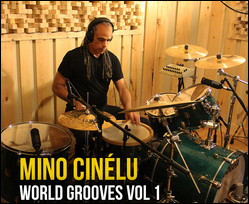 born in 1957 in Saint-Cloud, Île-de-France, France

Mino Cinélu (born 1957) is a French musician. He plays multiple instruments. He is a composer, programmer and producer; and is most often associated primarily for his work as a jazz percussionist.

Cinelu was born in Saint-Cloud, Hauts-de-Seine. His father is from Martinique and his mother is French.[1] He was involved with music from childhood as his father and two brothers were musicians, and started spending time and playing in various concert halls such as the Chapelle des Lombards in the suburbs of Paris. He became interested in various styles of music such as jazz, rock, salsa and even in more esoteric varieties like Egyptian chants and Romani music. He would later expand his repertoire to include fado, flamenco, African music, Japanese music, and Slavic music.[2]

The first instrument that Cinelu took to was the bongo drums, which led him to decide to try and live from his music. He often played the bongos in the streets where he first experimented with improvisation. At the end of the 1970s he became more and more interested in the French jazz fusion scene where he made many connections with other musicians and members of the music industry. At varying times he worked with Jef Gilson, Chute Libre, and Moravagine. Shortly thereafter he began playing with artists such as Bernard Lavilliers, Colette Magny, Gong, and Toto Bissainthe.

In 1979 he moved to New York City. After a difficult start he met several musicians living in and around the city such as George Benson, Wayne Shorter, Kenny Barron, and Cassandra Wilson. He continued to learn new instruments in different contexts; for example he played the bass in a gospel choir and earned some money by giving drum lessons. In the beginning of the 1980s he met Miles Davis while playing in a soul band at the New York club Mikkel's. Miles offered him a job as percussionist in his group, playing alongside the group's drummer Al Foster. After a month of rehearsals, Cinelu went on tour with Miles Davis' band.

His stint with Miles Davis led to more recognition; during a concert at the Hollywood Bowl, Joe Zawinul contacted him to join Weather Report as percussionist, which he accepted. During this period he began composing music, with the help of Weather Report members Wayne Shorter and Joe Zawinul.

Cinelu also played with Michel Portal after Michel saw him play at the Théâtre du Châtelet with Miles Davis.

This article uses material from the article Mino Cinelu from the free encyclopedia Wikipedia and it is licensed under the GNU Free Documentation License.