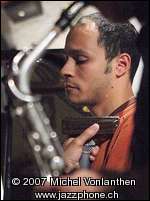 Grégoire Maret is a jazz harmonica player born on May 13, 1975 in Geneva, Switzerland. He began playing the harmonica at the age of 17.

In 2003 he was the subject of Swiss filmmaker Frédéric Baillif's documentary Sideman, which won several awards. In 2005, Maret toured with the Pat Metheny Group, receiving a Grammy for Best Contemporary Jazz Album for their album The Way Up. He also won the Jazz Journalists Association 'Player of the Year Award'.After his Grammy win, Maret embarked on a two-year tour with bassist Marcus Miller and subsequently joined Herbie Hancock's band.

Following his time with Herbie Hancock, he co-led the jazz trio Gaïa with pianist Federico Gonzales Peña and drummer Gene Lake. He also recorded an album, Scenarios, with Andy Milne in 2007. In 2010, Grégoire Maret played at The Concert for the Rainforest with Elton John and Sting.

This article uses material from the article Grégoire Maret from the free encyclopedia Wikipedia and it is licensed under the GNU Free Documentation License.

Aged And Mellow Catherine Russell
Update Required To play the media you will need to either update your browser to a recent version or update your Flash plugin.