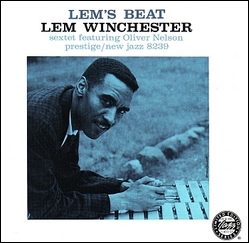 Formerly a police officer, Winchester pursued music as a hobby in Wilmington, Delaware.[1] He turned to music full-time after an appearance at the 1958 Newport Jazz Festival.[2] He was soon working with some of the top names in jazz, making his debut recording with pianist Ramsey Lewis.

Winchester recorded a handful of albums as a leader,[3] and made sideman appearances with the likes of saxophonist Oliver Nelson, and organists Jack McDuff and Shirley Scott. Most of his recordings were with Prestige Records. Critic Scott Yanow has suggested that while Winchester's playing was strongly influenced by Milt Jackson, he "did not stick around long enough to carve out his own original voice" on the vibraphone.[4]

Winchester's career was cut short when he died in a handgun accident, aged 32.[2]

This article uses material from the article Lem Winchester from the free encyclopedia Wikipedia and it is licensed under the GNU Free Documentation License.