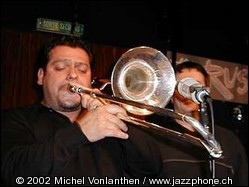 Luis Bonilla (born Luis Diego Bonilla, October 12, 1965, Los Angeles, Ca.) is an American Afro-Cuban and jazz trombonist born in Los Angeles, California of Costa Rican descent. He is a Grammy Award- winning performer, composer, and Music Professor,[1] about whom the New York Times has described as the artist who "explodes the usual musical structures of both Afro-Cuban and Latin Jazz".[2][3]

As a youth, Bonilla was introduced to music in general, and exposed to jazz in particular, while still a young student in school. He tells the anecdote of how he was enrolled in a brass class, believing it to be a metal shop class, only to find himself with a trombone in his hands. While learning to play the instrument, he found within himself a talent for music, and an enjoyment of jazz. He attended Eagle Rock High School in Los Angeles where he studied under John Rinaldo, director of music at the school. After he graduated high school Bonilla studied at Cal State Los Angeles,[4] earning a B.A. degree, and a M.A. degree in Jazz Performance and Composition from the Manhattan School of Music.[1] He first studied in Los Angeles with Don Raffell and Roy Main.

Bonilla has supported himself as a session musician and a sideman performing with jazz artists such as McCoy Tyner, Dizzy Gillespie, Lester Bowie, Tom Harrell, Freddie Hubbard, Astrud Gilberto, Willie Colón and Toshiko Akiyoshi. He has demonstrated his versatility as a musician working with artists as varied as Tony Bennett, Diana Ross, Marc Anthony, La India and Mary J. Blige.[5] He has drawn inspiration from Lester Bowie, his mentor, with whom he toured. Bonilla calls Bowie his "father away from home", with whom he has learned a great deal.[6]

In 1985 he joined the Gerald Wilson orchestra, with whom he recorded. Pasos Gigantes (1998) reached JAZZIZ's Latin Jazz Recording top ten, and both this effort and Escucha! (2000), were critically praised.

Bonilla moved on to become a bandleader and has recorded albums of his own.

Bonilla has evolved into a Professor of Music, having secured employment from the Manhattan School of Music, and is on the faculty at Temple University and New England Conservatory. He is a member of the Mingus Big Band, the Jazz at Lincoln Center Afro Cuban Jazz Orchestra, and the Vanguard Jazz Orchestra.[1] In February 2009, he received two Grammy Awards with the Vanguard Jazz Orchestra and Afro Latin Jazz Orchestra (Arturo O'Farrill Dir.)[7] In 2010 he was featured as a classical soloist on The Chamber Wind Music of Jack Cooper (Centaur Records) and as a jazz soloist on the large ensemble recording Coming Through Slaughter - The Bolden Legend (GCR) further showing his diversity as a major trombone artist.

This article uses material from the article Luis Bonilla from the free encyclopedia Wikipedia and it is licensed under the GNU Free Documentation License.

Baby It's Cold Outside Steve Tyrell & Jane Monheit
Update Required To play the media you will need to either update your browser to a recent version or update your Flash plugin.