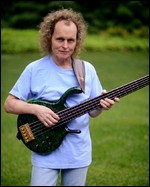 Mark Egan (Born 1951 in Brockton, Massachusetts) is an American jazz bass guitarist and trumpeter, arguably best known for his membership in the Pat Metheny Group from 1977 to 1980, and the Gil Evans Orchestra.[1] He is co-founder of the jazz fusion band, Elements.

Egan has maintained a solo career, with three platinum and three gold albums to his credit, and has served as bandleader of his own ensembles to positive reviews. Egan has additionally played on soundtracks for film, and has kept busy as a session musician, often contributing his skills to many famous musicians, within a variety of genres.

Egan has recorded with Sting, Arcadia, Roger Daltrey and Joan Osborne, among others; performed with Marianne Faithfull, David Sanborn, John McLaughlin, and Sophie B. Hawkins. and has played on the soundtracks to such American television shows and movies as Aladdin, The Color of Money, A Chorus Line, NBC Sports, ABC's All My Children, "CNN/Headline News" and numerous television commercials. Egan continues to tour and record worldwide with his group as well as Elements, Bill Evans, Larry Coryell and various other artists.

Influenced by his father, Egan first studied trumpet at age 10. He played the trumpet throughout high school, and switched to the bass when he was 15. While attending the University of Miami's Frost School of Music, he studied with jazz educator Jerry Coker. While in Miami he also became friends and performed with Ira Sullivan, Pat Metheny, Danny Gottlieb, Clifford Carter and many other inspirational players. Within that same group was the now-famous fretless bass guitarist, Jaco Pastorius, who Egan lists specifically as a revolutionary performer and influence. Since Pastorius and Egan both lived in Florida in the late 1960s and early 1970s, Egan got to know him and even studied Pastorius' approach to the bass, going so far as to take formal courses with him.[1]

Egan has released six albums as a leader. One of the most recent, As We Speak, features guitarist John Abercrombie and drummer and former Pat Metheny Group bandmate Danny Gottlieb. Within Elements, the group that he co-leads with Danny Gottlieb, he has released 10 recordings. He has also created three music videos: "Om Yoga & Meditation," "Music on the Edge," and "Bass Workshop," a bass instructional video. He has appeared on the soundtracks of movies including Two Moon Junction, The Object of My Affection, You've Got Mail and The Color of Money. Egan is also featured on drummer Ken Serio's 2008 release Live... In The Moment. He recorded an album, Urge, with trumpeter Forrest Buchtel, Jr., featuring, among other things, the theme from CNN Headline News.[1]

Mark Egan founded his own record label, Wavetone Records, in 1992.[1]

This article uses material from the article Mark Egan from the free encyclopedia Wikipedia and it is licensed under the GNU Free Documentation License.

That's All Raphael Jost Standards Trio
Update Required To play the media you will need to either update your browser to a recent version or update your Flash plugin.