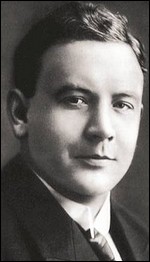 Born Lauritz Lebrecht Hommel Melchior in Copenhagen, Denmark, the young Melchior was a boy soprano and amateur singer before starting his first operatic vocal studies under Paul Bang at the Royal Opera School in Copenhagen at the age of 18 in 1908.

In 1913, Melchior made his debut in the baritone role of Silvio in Ruggero Leoncavallo's Pagliacci at the Royal Theatre (Det Kongelige Teater) in Copenhagen. He sang mostly secondary baritone and bass roles for the Royal Danish Opera and provincial Scandianavian opera companies for the next few years.

One night, while on tour, Melchior helped an ailing soprano performing in Il trovatore by singing a high C in the Act IV Leonora-di Luna duet. The Azucena of that performance, the American contralto Mme Charles Cahier, was impressed by the tone she had heard and gave her young colleague sound advice: he was no baritone, but a tenor "with the lid on." She even wrote to the Royal Opera pleading that Melchior be given a sabbatical and a stipend to restudy his voice. This he did between 1917 and 1918, taking lessons from the noted Danish tenor Vilhelm Herold (1865-1937) who had sung Wagnerian roles in Covent Garden, Chicago and elsewhere from 1900 to 1915. This proved to be a turning point in Melchior's career. His high baritone voice was recast into that of a low tenor, but with a strong high extension. His second debut was on 8 October 1918 in the title role of Tannhäuser, also at the Royal Opera in Copenhagen.

In 1920, Melchior visited England to sing in an experimental radio broadcast to the Scandinavian capital cities from the Marconi station in Chelmsford. From 1920, Melchior was a frequent performer in London, appearing at Sir Henry J. Wood's Prom Concerts in Queen's Hall.

In September 1920, when he was singing the Steersman's Song, from Wagner's The Flying Dutchman at a Prom Concert, he met the popular novelist and passionate Wagnerite Hugh Walpole and the two quickly became firm friends, travelling together and staying in each other's houses. On a visit to Walpole's cottage in Polperro Melchior "caused a sensation by singing at a concert in the village", and later on a visit to Helston he and Walpole both took part in the Floral Dance. In December 1921 on a visit with Walpole to his (Walpole's) parents in Edinburgh, Melchior gave a concert in the Usher Hall. Walpole provided the fledgling Heldentenor with financial aid in February 1922, paying in advance two-thirds of the fees for his studies under Victor Beigel. In 1923, Walpole gave Melchior a further £800, enabling him to continue his studies with Ernst Grenzebach and the legendary dramatic soprano of the Vienna Court Opera, Anna Bahr von Mildenburg.[1]

Word of his talent spread and was heard of by Cosima and Siegfried Wagner at Bayreuth. There the re-opening of the Festival for 1924 was under preparation. Melchior was engaged to sing Siegmund and Parsifal. This prestigious contract opened the way to several other appearances such as a Wagner concert with Frida Leider in Berlin in 1923. Around this time several acoustic records were cut for Polydor.

On May 14, 1924 Lauritz Melchior made his debut, as Siegmund, at the Royal Opera House at Covent Garden in London. The result was a smashing success. Some weeks later Melchior made his debut on the stage of the Festspielhaus in Bayreuth in the roles of Siegmund and Parsifal. In July 1925 Adolf Hitler attended a performance of Parsifal in Bayreuth as a guest of Winifred Wagner. According to Walpole, who was sitting in Wagner's box next to Hitler, as Melchior sang, "the tears poured down Hitler's cheeks".[1] On February 17, 1926 his first appearance at the Metropolitan Opera in New York City took place. He sang Tannhäuser opposite Maria Jeritza, Friedrich Schorr, Karin Branzell and Michael Bohnen with Artur Bodanzky conducting. Although he was not adversely criticized, there was not much enthusiasm elicited by this debut. In his first season at the Metropolitan opera, Melchior sang only eight times. His second season brought only one appearance. To build up his repertory and gain more stage experience, he accepted an engagement at the Hamburg State Opera, where he appeared as Lohengrin, Otello, Radames in Aida and Jean van Leyden in Le prophète. He also sang regularly at other major German music theaters, like the State Operas of Berlin and Munich.

Although Melchior sang at most of the theatres and concert halls of the Western world during his long career, he is perhaps best remembered as a member of the Metropolitan Opera company, where he sang 519 performances of Wagnerian roles between 1926 and 1950. Melchior's breakthrough at the Metropolitan Opera finally came when he performed in Tristan und Isolde on March 20, 1929. From this point on his career flourished.

Melchior appeared at Covent Garden from 1924 to 1939, also as Otello (opposite Viorica Ursuleac as Desdemona) and Florestan, besides the Wagnerian repertory. Also at Covent Garden in 1932, he sang opposite popular soprano Florence Easton in Siegfried, the only time they appeared together. Other important stations of his career were in the Buenos Aires (Teatro Colón) (193143), San Francisco Opera (193445) and Chicago Opera (193445). It was Lohengrin's Farewell that served as Melchior's "swan song" in his last stage performance, on February 2, 1950.

Melchior made very many recordings, first as a baritone on Danish HMV, then as a tenor for Deutsche Grammophon (Polydor) (192330), English and German HMV (192735), RCA Victor (193841), American Columbia (194250) and lastly Warner. His final appearance with Danish radio was in 1960 with a performance of the first act of Die Walküre to celebrate his 70th birthday, which was recorded and constitutes a terrific souvenir of the indestructible, indeed almost supernatural Melchior in full flight.

Between 1944 and 1952, Melchior performed in five Hollywood musical films for MGM and Paramount Pictures and made numerous US radio and television appearances. In 1947, he put his hand and footprints in cement in the forecourt of Grauman's Chinese Theatre in Hollywood.

From 1946 to 1949 Melchior went on a world tour with his personal conductor Ezra Rachlin. Their visit to Denmark was particularly meaningful as they were the guests of King Frederick IX, who was an amateur conductor with his own personal concert hall in his palace.

Following his unofficial retirement around 1955, Melchior made sporadic singing appearances. On occasion he would sing the national anthem at Dodgers baseball games in Los Angeles, such as Game 3 of the 1963 World Series. In the late 1960s, he set up a fund through the Juilliard School for the training of potential heldentenors called "The Lauritz Melchior Heldentenor Foundation."

In the summer of 1972, Melchior conducted the San Francisco Opera Orchestra at Sigmund Stern Grove in the Radetzky March by Johann Strauss I as part of the 50th anniversary celebration of the company; this was one of his last public appearances.

An American citizen since 1947, Melchior died in Santa Monica, California in 1973. He was put to rest in the Assistens Kirkegaard cemetery in Copenhagen.

Melchior was the father of Danish-American novelist and filmmaker Ib Melchior, who has written a biography about him and for years has fought a legal battle to reclaim the Melchior family estate Chossewitz in Germany, which was confiscated by East Germany.

This article uses material from the article Lauritz Melchior from the free encyclopedia Wikipedia and it is licensed under the GNU Free Documentation License.