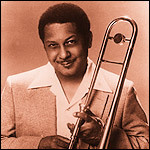 Britt Woodman (June 4, 1920, Los Angeles October 13, 2000, Hawthorne, California) was a jazz trombonist. He is best known for his work with Duke Ellington and Charles Mingus.

He knew Mingus from childhood, but first worked with Phil Moore and Les Hite. After service in World War II he played with Boyd Raeburn before joining with Lionel Hampton in 1946. During the 1950s he worked with Ellington. As a member of Ellington's band he can be heard on Such Sweet Thunder (1957), Ella Fitzgerald Sings the Duke Ellington Song Book (also 1957), Black, Brown, and Beige (1958) and Ellington Indigos (1958).

Steve Turre, among others, have cited him as an influence.

With Hank Jones and Oliver Nelson

With Zoot Sims with the Benny Carter Orchestra

This article uses material from the article Britt Woodman from the free encyclopedia Wikipedia and it is licensed under the GNU Free Documentation License.

Poor Butterfly Claude Hopkins
Update Required To play the media you will need to either update your browser to a recent version or update your Flash plugin.