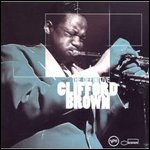 Clifford Benjamin Brown[1] (October 30, 1930 – June 26, 1956), also known as "Brownie", was an American jazz trumpeter. He died at the age of 25 in a car accident,[2] leaving behind only four years' worth of recordings. He influenced later jazz trumpet players including Booker Little, Freddie Hubbard, Lee Morgan [3]. He was also a composer of note: two of his compositions, "Joy Spring"[4] and "Daahoud",[5] have become jazz standards.[6]

Brown was born into a musical family in a progressive East-Side neighborhood of Wilmington, Delaware. His father organized his four youngest sons, including Clifford, into a vocal quartet. Around age ten, Brown started playing trumpet at school after becoming fascinated with the shiny trumpet his father owned. At age thirteen, upon entering senior high, his father bought him his own trumpet and provided him with private lessons. As a junior in high school, he received lessons from Robert Boysie Lowery and played in "a jazz group that Lowery organized." He even began making trips to Philadelphia. Brown took pride in his neighborhood and earned a good education from Howard High.[7]

Brown briefly attended Delaware State University[8] as a math major, before he switched to Maryland State College, which was a more prosperous musical environment. As Nick Catalano points out, Brown's trips to Philadelphia grew in frequency after he graduated from high school and entered Delaware State University; it could be said that, although his dorm was in Dover, his classroom was in Philadelphia. Brown played in the fourteen-piece, jazz-oriented, Maryland State Band. In June 1950, he was seriously injured in a car accident after a successful gig. During his year-long hospitalization, Dizzy Gillespie visited the younger trumpeter and pushed him to pursue his musical career.[9] Brown's injuries limited him to the piano for months; he never fully recovered and would routinely dislocate his shoulder for the rest of his life.[7] Brown moved into playing music professionally, where he quickly became one of the most highly regarded trumpeters in jazz.[2]

Brown was influenced and encouraged by Fats Navarro,[9] sharing Navarro's virtuosic technique and brilliance of invention. His sound was warm and round, and notably consistent across the full range of the instrument. He could articulate every note, even at very fast tempos which seemed to present no difficulty to him; this served to enhance the impression of his speed of execution. His sense of harmony was highly developed, enabling him to deliver bold statements through complex harmonic progressions (chord changes), and embodying the linear, "algebraic" terms of bebop harmony. In addition to his up-tempo prowess, he could express himself deeply in a ballad performance.

His first recordings were with R&B bandleader Chris Powell,[9] following which he performed with Tadd Dameron, J. J. Johnson, Lionel Hampton, and Art Blakey before forming his own group with Max Roach. The Clifford Brown & Max Roach Quintet was a high-water mark of the hard bop style, with all the members of the group except for bassist George Morrow contributing original songs. Brown's trumpet was originally partnered with Harold Land's tenor saxophone. After Land left in 1955 in order to spend more time with his wife, Sonny Rollins joined and remained a member of the group for the rest of its existence. In their hands the bebop vernacular reached a peak of inventiveness.[2]

The clean-living Brown escaped the influence of heroin and alcohol on the jazz world. Brown stayed away from drugs and was not fond of alcohol.[2] Rollins, who was recovering from a heroin addiction, said that "Clifford was a profound influence on my personal life. He showed me that it was possible to live a good, clean life and still be a good jazz musician."[10]

In June 1956, Brown and Richie Powell embarked on a drive to Chicago for their next appearance. Powell's wife Nancy was at the wheel so that Clifford and Richie could sleep. While driving at night in the rain on the Pennsylvania Turnpike, west of Bedford, she is presumed to have lost control of the car, which went off the road, killing all three in the resulting crash.[11] Brown is buried in Mt. Zion Cemetery, in Wilmington, Delaware.[12]

Benny Golson, who had done a stint in Lionel Hampton's band with Brown, and was a member along with Brown of Tadd Dameron's Big 10, wrote "I Remember Clifford" to honor his memory. The piece became a jazz standard, as musicians paid tribute by recording their own interpretations of it.

Duke Pearson who had yet to record for Blue Note records wrote "Tribute To Brownie", which was recorded by the Cannonball Adderley Quintet on his 1957 album, Sophisticated Swing. It also appeared on an album by trumpeter Louis Smith, Here Comes Louis Smith with Cannonball again on alto saxophone.

Arturo Sandoval's entire second album after fleeing from his native Cuba, entitled I Remember Clifford, was likewise a tribute to Brown.

Brownie Speaks, a video documentary, is the culmination of years of research by Wilmington-born jazz pianist Don Glanden, research that has included interviews with Brown's friends, family, contemporaries, and admirers. Glanden's son Brad edited these interviews, along with archival materials and newly shot video footage. The documentary premiered in 2008 at the "Brownie Speaks" Clifford Brown Symposium hosted by the University of the Arts in Philadelphia. The three-day symposium featured performances from close friends and bandmates of Brown such as Golson and Lou Donaldson and other artists inspired by Brown, including Marcus Belgrave, Terence Blanchard, and John Fedchock.

Spanish film director Jesús Franco often used Clifford Brown as a screen pseudonym in homage to one of his musical heroes.

In 1994, Brown's widow, LaRue Brown Watson, established the Clifford Brown Jazz Foundation, a 501(c)(3) organization dedicated to Brown's memory and inspiring a love for jazz among young people. The Foundation is under the direction of Clifford Brown III, Brown's grandson and a respected Bay Area trumpeter and music producer.

This article uses material from the article Clifford Brown from the free encyclopedia Wikipedia and it is licensed under the GNU Free Documentation License.

Pent Up House Y-Jazz
Update Required To play the media you will need to either update your browser to a recent version or update your Flash plugin.