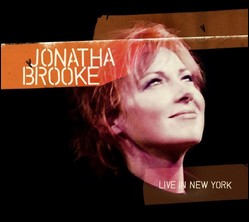 Jonatha Brooke (born January 23, 1964) is an American folk rock singer-songwriter and guitarist from Massachusetts.[1] Her music merges elements of folk, rock and pop, often with poignant lyrics and complex harmonies. She has been a performer, writer, and artist since the late 1980s, and her songs have been used in television shows and movies.

Jonatha Brooke graduated from Commonwealth School in Boston before moving on to Amherst College.

Jonatha Brooke and fellow Bostonian Jennifer Kimball began playing music together in the 1980s after having met at Amherst College. They performed regularly during their college years.[2] Their folk songs were marked by "witty wordplay and sumptuous pop harmonies," according to one music critic.[3] Another critic suggested Brooke was the creative dynamo behind the team.[2] Another suggested that many artists of this era were inspired by Joni Mitchell to strive for excellent musicianship, singing, and writing.[4] Brooke was sometimes grouped with emerging 1990s talents such as the Indigo Girls, Sheryl Crow, Shawn Colvin, and Mary Chapin Carpenter.[4] She continued to write and perform although there was a brief hiatus in which she focused on ballet.[1]

In 1989, the duo played the coffeehouse folk circuit and radio as The Story and were described as an example of the "folk-rock singer-songwriter aesthetic," according to one account.[2] That year they created a demo called Over Oceans. They were signed to the independent label Green Linnet which, in 1991, issued the duo's debut full-length album Grace in Gravity. Later Elektra Records signed The Story and re-issued their debut. Their second album, The Angel in the House, was released in 1993, highlighting their intricate and sometimes dissonant harmonies.

One music critic described their approach as "levity" between heavy songs about "God, church, death, female oppression, self-suppression, mothers and daughters."[5] Their songs adroitly avoided "heavy-handedness" with a certain "winning buoyancy of tune and/or spirit" with "sophisticated harmonic changes whose intriguing hooks come at you cockeyed and sideways more often than they swoop down from the heavens."[5] The duo were compared with artists such as Suzanne Vega and Indigo Girls.[6] Another reviewer gave the duo mixed reviews: "intriguingly distorted harmonies and interesting turns of phrase" but some "attempts at cleverness overreached" and there was "a painfully obvious unrecorded song about dieting and a silly, albeit self-consciously so, stab at voguing a la Madonna."[6]

In 1994, Brooke pursued a solo career.[3] One critic described Brooke as having a "lovely soprano voice" and liked the "catchy original melodies and thorny lyrics."[2] Her first solo effort Plumb (1995) won mixed reviews; one critic did not like the "too-bald preachiness".[3] But the followup 10 Cent Wings[2] was received more favorably and earned critical commentary such as "sly phrases and lush pop arrangements that made The Story so enjoyable" although sometimes literary conceits were stretched too far, according to one critic.[3] Brooke shifted from folk-pop to a more radio-friendly style. At some point in these years Brooke married Alain Mallet, a keyboard player who also became her producer and arranger.[3]

The changing dynamics of the music business in the middle 1990s had a "sell-or-perish" pattern featuring a "leaner, meaner record industry," as one critic described the industry in the 1990s.[7] "I was in the middle of a national tour when MCA dropped me," Brooke recalled. "One second you're a princess on the throne, and the next week no one will return your phone calls," she commented to a reporter.[8]

But after moping, she recalled: "I realized something had changed. I didn't have a contract with MCA Records, and I didn't have tour support, and I wasn't going to get to make a video, which they had promised. But the shows were still sold out, my audience was still there and they didn't care whether or not I was part of the Universal conglomerate. That was a really empowering and reassuring time."[2]

While in her early 30s without backing from a major label, she became known as an industrious "cutting-edge world of do-it-yourself" marketer by using the Internet creatively to reach out to fans.[7] She recorded "Jonatha Brooke Live" (1999) on her own label Bad Dog Records.[7][8] At first she sold via the Internet. She packaged and mailed about 2,500 copies and autographed each one for a personal touch.[7] She moved to Malibu in 1997.[8]

Critics wrote mostly positive reviews. One described her as a "down-to-earth poet" with "an apparently inexhaustible supply of anecdotes" and "flawlessly crafted lush backdrops for songs that mused wistfully about love and destiny," although "emotions were often obscured by the complex arrangements and gorgeous vocal harmonies."[9] Another critic described her earlier songs as "introspective, sometimes bleak Joni Mitchell-esque compositions."[8] Another described her music as "contemporary folk".[10]

In the mid 1990s Brooke's vocals were featured in a Goodyear Tire commercial.[11]

Brooke's next album, Steady Pull (2001) reflected "relief and optimism."[8] She again released it on her own label, commenting that there were "still plenty of dark corners on this record, but I wanted to push boundaries." A critic said she opened up more with this album.[8] Her song "New Dress" was about a newfound romantic bliss.[8] This rock-influenced album was co-produced by Brooke and music engineer Bob Clearmountain who worked with artists such as Bryan Adams, The Rolling Stones, The Corrs, and Hall & Oates. Later, her song "Your House" was included in the ABC series entitled Once and Again.[12]

In 2002, she performed two songs on Disney's Return to Never Land soundtrack, a movie based on the Peter Pan story, contributing her original song "I'll Try" and a cover "The Second Star to the Right".[12][13] Brooke was featured as a guest vocalist with artists such as Lisa Loeb, Chris Botti and Patty Larkin, and has co-written tracks for Joe Sample's The Pecan Tree.

In 2003, Brooke revamped 1995's song "War" as a protest against the Gulf War.[14] In 2004, she released Back in the Circus with new material plus song covers from songs by The Alan Parsons Project, The Beach Boys, and James Taylor. The album was also released in the United Kingdom in 2005 and combined tracks with several Steady Pull songs.[2] In August 2006, she released a combination CD and DVD titled Live in New York. Jonatha Brooke got married again in 2004––this time to manager Patrick Raines.[15] She moved back from California to New York's upper west side.[15] In April 2007, Brooke released Careful What You Wish For via Rykodisc distribution.[16] "The vibe of the album," she wrote in notes for reporters, was "all about busting out, being on the edge, playing with great abandon to see what we could come up with."[16]

Some Brooke songs have been sung or "covered" by other artists. Her tune "Because I Told You So" from Ten Cent Wings was covered by Nick Lachey on his 2006 album What's Left of Me.[17] Her song "Inconsolable" from Plumb was featured in a TV episode of Buffy the Vampire Slayer[12] entitled "Prophecy Girl". Buffy creator Joss Whedon chose Brooke's "What You Don't Know" to be the theme song for the TV series Dollhouse[12][18] starring Eliza Dushku. In 2008, Brooke appeared on the Tinker Bell movie soundtrack with the song "Be True". The movie's soundtrack was released on October 14, 2008, a week before the DVD release and contains songs from and inspired by the film. In February 2008, Brooke recorded The Works which was her seventh solo release.[19] This effort was inspired by the music of late folk legend Woody Guthrie.[18][20][21][22] Brooke was invited by Guthrie's daughter Nora to sift through the private archives and hunt through Guthrie's unreleased material for possible adaptations.[22] Brooke said she was "smitten" with Guthrie's work and going through it was like "going to church."[21] She liked his poetic love songs like "My Sweet and Bitter Bowl" and spiritual deeper tunes like "My Battle"[21] and loved Guthrie's "full spectrum of craziness" as she described his writings.[21] Brooke's The Works featured talented musicians including keyboard player Joe Sample, bassist Christian McBride, drummer Steve Gadd, and pedal steel guitarist Greg Leisz.[19]

One reviewer lauded Brooke's "forceful, girlish voice" and described her tune "My Sweet and Bitter Bowl" as a "driving opener" and "standout" and described the entire suite of songs as "solid" but which "rarely sparkles".[19] The critic described the album as a "Brooke record" not a "Guthrie one".[19] Another critic described the album as "Woody Guthrie's lyrics" with "an urbane new voice within Brooke's sleek, winking alt-pop ... if the Dust Bowl troubadour had matriculated at Amherst, he'd sound just like this."[23] In 2008, she participated in the music album Songs for Tibet, an initiative to support Tibetan Dalai Lama Tenzin Gyatso. The album was issued on August 5 via iTunes and on August 19 in stores.[24] In 2009, she shared vocal duties with Davy Knowles on the song "Taste Of Danger" on the album Coming Up For Air from Davy Knowles & Back Door Slam. Brooke was a judge on the 10th[25][26][27] and 11th[28] annual Independent Music Awards. She was also a judge for the 5th and 9th Independent Music Awards.[29] According to Brooke in an interview, her favorite collaboration with other artists was the song "Forgiven" with Chris Botti (in Chris' 2002 CD The Very Best of Chris Botti)[30] In 2010, Jonatha Brooke performed as the first part of the French tour of Nolwenn Leroy, singing songs in English and in French, and joined Nolwenn Leroy for some duets.

This article uses material from the article Jonatha Brooke from the free encyclopedia Wikipedia and it is licensed under the GNU Free Documentation License.