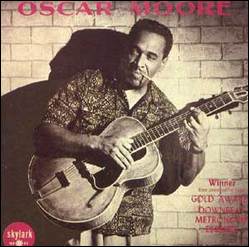 Moore was born in Austin, Texas, but grew up in Los Angeles. During the 1930s he often worked with his brother, Johnny, who was also a guitarist. Beginning in 1937, he spent ten years with Nat King Cole in the guitar-bass-piano trio format that influenced Oscar Peterson, Art Tatum, and Ahmad Jamal. After he left Cole, he joined his brother in Johnny Moore's Three Blazers through the 1950s. He recorded two solo albums in 1954, then left the field of music. During the last decades of his life, he laid bricks and ran a gas station.[2] He died in Las Vegas, Nevada, in 1981.[1]

Barney Kessel said that Moore practically created the role of the jazz guitarist in small combos. He was voted top guitarist of 1945, 1946, and 1947 in the Down Beat magazine readers' poll.

With The Capitol International Jazzmen

This article uses material from the article Oscar Moore from the free encyclopedia Wikipedia and it is licensed under the GNU Free Documentation License.