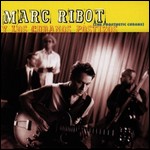 His work has touched on many styles, including no wave, free jazz, rock, and Cuban music. Ribot is also known for collaborating with other musicians, most notably Tom Waits, Elvis Costello, Vinicio Capossela and John Zorn.

Ribot's earliest session work was featured on Tom Waits's Rain Dogs (1985) and helped define Waits's new musical direction.[3] Ribot worked with Waits on many of his following albums including Franks Wild Years (1987), Big Time (1988), Mule Variations (1999), Real Gone (2004), Orphans: Brawlers, Bawlers & Bastards (2006) and Bad as Me (2011). He has appeared on Elvis Costello's Spike (1989), Mighty Like a Rose (1991), and Kojak Variety (1995). Ribot has appeared on numerous recordings by John Zorn, including many of Zorn's Filmworks recordings, solo performances on Zorn's Masada Guitars (also featuring Bill Frisell and Tim Sparks), and is a member of Zorn's Bar Kokhba Sextet and Electric Masada.

Ribot admitted to Guitar Player a relatively limited technical facility due to learning to play right-handed despite being left-handed: "That's a real limit, one that caused me a lot of grief when I was working with Jack McDuff and realizing I wasn't following in George Benson's footsteps. I couldn't be a straight-ahead jazz contender if you held a gun to my head, but that begs the question of whether I would want to be one."[5]

A biographical documentary film about Ribot was made, called The Lost String.[7]

Ribot was also a judge for the sixth annual Independent Music Awards.[8]

This article uses material from the article Marc Ribot from the free encyclopedia Wikipedia and it is licensed under the GNU Free Documentation License.

Meet Me With Your Black Dress On Blue Flagships
Update Required To play the media you will need to either update your browser to a recent version or update your Flash plugin.