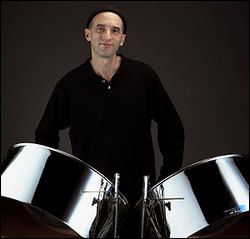 Andy Narell (born March 18, 1954 in New York City, US) is a jazz musician and composer specialized in the steelpan.[1]

Narell was born in New York City. He took up the steelpan at a very young age in Queens, New York, because his father, social worker Murray Narell, had started a program of steelpan playing for at-risk youth at the Jewish philanthropic Education Alliance in Lower East Side Manhattan, using two sets of pans made by Antigua-native Rupert Sterling, the two sets shared by 20 youth bands. From 1962, Andy, his brother Jeff, and three others boys played on a third set of Sterling-made pans in the basement of the Narell house in the Whitestone neighborhood of Queens, calling themselves the Steel Bandits. The Steel Bandits was a novelty steelpan group that played concerts and appeared on television shows including I've Got a Secret in 1963.[2][3] The band played many venues including Carnegie Hall in New York, and at the National Music Festival of Trinidad. Murray Narell invited Ellie Mannette in 1964 to expand steelpan activities in New York City and finally convinced him to come in 1967. Mannette taught the Narell boys more technique, and they played on improved pans tuned by Mannette.[4]

He has performed with the Caribbean Jazz Project, Montreux, Sakésho, Calypsociation, and Béla Fleck and the Flecktones. He additionally composed and arranged music for Trinidad's national steelband competition Panorama.[1] Narell also performed in South Africa in 1999 in front of a crowd of 80,000 people.[1]

He has two children, Isaac Narell and Mia Narell, and currently resides in Paris.

This article uses material from the article Andy Narell from the free encyclopedia Wikipedia and it is licensed under the GNU Free Documentation License.

I'll Be Seeing You Guy Lafitte
Update Required To play the media you will need to either update your browser to a recent version or update your Flash plugin.