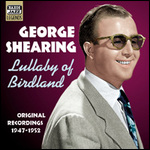 Sir George Shearing, OBE (13 August 1919 – 14 February 2011) was a British jazz pianist who for many years led a popular jazz group that recorded for Discovery Records, MGM Records and Capitol Records. The composer of over 300 titles, including the jazz standard "Lullaby of Birdland", had multiple albums on the Billboard charts during the 1950s, 1960s, 1980s and 1990s.[1] He died of heart failure in New York City, at the age of 91.

Born in Battersea, London, Shearing was the youngest of nine children. He was born blind to working class parents: his father delivered coal and his mother cleaned trains in the evening. He started to learn piano at the age of three and began formal training at Linden Lodge School for the Blind, where he spent four years.[2]

Though he was offered several scholarships, Shearing opted to perform at a local pub, the Mason's Arms in Lambeth, for "25 bob a week"[3] playing piano and accordion. He joined an all-blind band during that time and was influenced by the records of Teddy Wilson and Fats Waller.[1] Shearing made his first BBC radio broadcast during this time after befriending Leonard Feather, with whom he started recording in 1937.[2]

In 1940, Shearing joined Harry Parry's popular band and contributed to the comeback of Stéphane Grappelli. Shearing won seven consecutive Melody Maker polls during this time. Around that time he was also a member of George Evans's Saxes 'n' Sevens band.

In 1947, Shearing emigrated to the United States, where his harmonically complex style mixing swing, bop and modern classical influences gained popularity. One of his first performances was at the Hickory House. He performed with the Oscar Pettiford Trio and led a jazz quartet with Buddy DeFranco, which led to contractual problems, since Shearing was under contract to MGM and DeFranco to Capitol Records.

In 1949, he formed the first George Shearing Quintet, a band with Margie Hyams (vibraphone), Chuck Wayne (guitar), later replaced by Toots Thielemans (listed as John Tillman), John Levy (bass), and Denzil Best (drums). This line-up recorded for Discovery, Savoy, and MGM, including the immensely popular single "September in the Rain" (MGM), which sold over 900,000 copies; "my other hit" to accompany "Lullaby of Birdland". Shearing said of this hit that it was "as accidental as it could be."[3]

Shearing's interest in classical music resulted in some performances with concert orchestras in the 1950s and 1960s, and his solos frequently drew upon the music of Satie, Delius, and Debussy for inspiration. He became known for a piano technique known as "Shearing's voicing", a type of double melody block chord, with an additional fifth part that doubles the melody an octave lower. (This style is also known as "locked hands" and the jazz organist Milt Buckner is generally credited with inventing it.)

In 1956, Shearing became a naturalized citizen of the United States.[3] He continued to play with his quintet, with augmented players through the years, and recorded with Capitol until 1969. He created his own label, Sheba, that lasted a few years. Along with dozens of musical stars of his day, Shearing appeared on ABC's The Pat Boone Chevy Showroom. Earlier, he had appeared on the same network's reality show, The Comeback Story, in which he discussed how to cope with blindness.

In 1970, he began to "phase out his by-now-predictable quintet"[1] and disbanded the group in 1978. One of his more notable albums during this period was The Reunion, with George Shearing (Verve 1976), made in collaboration with bassist Andy Simpkins and drummer Rusty Jones, and featuring Stéphane Grappelli, the musician with whom he had debuted as a sideman decades before.

Later, Shearing played in a trio, as a soloist, and increasingly in a duo. Among his collaborations were sets with the Montgomery Brothers, Marian McPartland, Brian Q. Torff, Jim Hall, Hank Jones, and Kenny Davern. In 1979, Shearing signed with Concord Records, and recorded for the label with Mel Tormé. This collaboration garnered Shearing and Tormé two Grammys, one in 1983 and another in 1984.

Shearing remained fit and active well into his later years and continued to perform, even after being honoured with an Ivor Novello Lifetime Achievement Award in 1993. He never forgot his native country and, in his last years, would split his year between living in New York and Chipping Campden, Gloucestershire, where he bought a house with his second wife, singer Ellie Geffert. This gave him the opportunity to tour the UK, giving concerts, often with Tormé, backed by the BBC Big Band. He was appointed OBE in 1996. In 2007, he was knighted. "So", he noted later, "the poor, blind kid from Battersea became Sir George Shearing. Now that's a fairy tale come true."

He was the subject of This Is Your Life in 1992 when he was surprised by Michael Aspel.

In 2004, he released his memoirs, Lullaby of Birdland, which was accompanied by a double-album "musical autobiography", Lullabies of Birdland. Shortly afterwards, however, he suffered a fall at his home and retired from regular performing.[4]

In 2012 Derek Paravicini and jazz vocalist Frank Holder did a tribute concert to the recordings of Shearing. Ann Odell transcribed the recordings and taught Paravicini the parts, as well as being the MD for the concerts. Lady Shearing also endorsed the show, sending a letter to be read out before the Watermill Jazz Club performance.

Shearing was married to Trixie Bayes from 1941 to 1973. Two years after his divorce he married his second wife, the singer Ellie Geffert, who survived him.[5]

Shearing was a member of the Bohemian Club and often performed at the annual Bohemian Grove Encampments. He composed music for two of the Grove Plays.

This article uses material from the article George Shearing from the free encyclopedia Wikipedia and it is licensed under the GNU Free Documentation License.