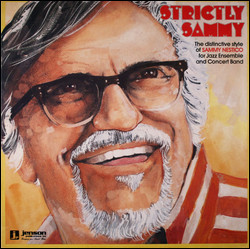 Sammy Nestico (born Samuel Louis Nistico, February 6, 1924 in Pittsburgh, Pennsylvania) is an American composer and arranger of big band music. Nestico is best known for his arrangements for the Count Basie orchestra.[1]

Sammy Nestico has been a professional music arranger since 1941, when he became a staff arranger at age 17 for ABC radio station WCAE in Pittsburgh, Pennsylvania. During his career, he arranged music for the Count Basie Orchestra (1967–1984), the U.S. Air Force Band (fifteen years) and the U.S. Marine Band (five years) both in Washington, D.C. In addition, he played trombone in the big bands of Tommy Dorsey, Woody Herman, Gene Krupa, and Charlie Barnet.

During his long career in the television and film industry, he arranged and conducted projects for Bing Crosby, Sarah Vaughan, Toni Tennille, Frank Sinatra, Phil Collins, Barbra Streisand, and Count Basie. As orchestrator, he has worked on nearly seventy television programs, including Mission: Impossible, Mannix, Charlie's Angels, and The Mod Squad.

He has published nearly 600 numbers for school groups and many for professional big bands. He has conducted and recorded his arrangements with several leading European Radio Jazz Orchestras, including the BBC Big Band in London, Germany's SWR Big Band and NDR Big Band and the DR Big Band.

Nestico received a Bachelor's degree in music education from Duquesne University in 1950, and he has received an honorary Doctor of Music degree from his alma mater.

The Airmen of Note, the premier jazz ensemble of the USAF, sponsor an annual competition[3] for composers and arrangers of big band music, in honor of Sammy Nestico. Previous winners are:

This article uses material from the article Sammy Nestico from the free encyclopedia Wikipedia and it is licensed under the GNU Free Documentation License.

The Forbidden Word Mads Mathias
Update Required To play the media you will need to either update your browser to a recent version or update your Flash plugin.